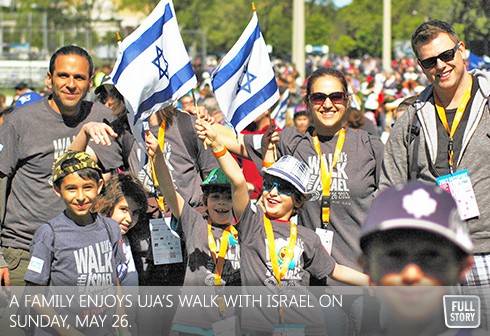 By Daniel Koren--As I approached Coronation Park early Sunday morning, the sounds of cheer and applause could be heard from miles away, growing louder and louder with each forward step. As the scene came into clear view, thousands of men, women and children could be seen, waving both Israeli and Canadian flags, smiling and cheering, and hanging on to each word of the cadre of guest speakers in attendance that offered their support and wisdom.

I was here. UJA’s annual Walk with Israel.

An annual tradition in Jewish Toronto for over four decades now, UJA’s Walk with Israel is the largest single-day Israel solidarity event in the Diaspora, each year gathering ten to fifteen thousand members of our community who walk together in support of the people of Israel. The funds raised through the Walk support a number of UJA’s ongoing transformative programs and initiatives throughout the Jewish state, including the absorption of new olim (new immigrants) as well as programs that benefit vulnerable communities in Sderot, Bat Yam, and Eilat.

I arrived at the Park, where the Walk kick-off party was taking place, just in time to catch an exclusive performance from Canadian-born, Juno-nominated R&B sensation Danny Fernandes, who was seceded by a long list of distinguished guest speakers, including the Premier of Ontario, Kathleen Wynne. Who officially kicked-off the Walk, and Consul General of Israel to Western Canada and Ontario, DJ Schneeweiss.

“These events are extremely important for the programs that they run and for the money that is raised,” Wynne said.

The eruption of cheers and applause that followed her speech was genuine, as the crowd proudly waved Canadian, Israeli and LGBT flags.

The blare of the air horns then signified that the Walk with Israel was officially underway, as thousands took to the streets of downtown Toronto, walking proudly to show their solidarity with Israel and pausing only at pre-determined rest stops, which, from the dancing, loud Israeli music, and boisterous crowds, seemed more like mini-parties than actual “rest stops.”  The Walk itself ended at the Direct Energy Centre, but the party continued at the Renee & Irwin Nadal Festival, offering a family-friendly agenda complete with camel rides, bumper cars, amusement rides, arts & craft, and even a kosher BBQ.

“UJA is proud that we are able to put on the largest Jewish communal event in Canada and the largest Israel solidarity walk in the Diaspora,” said Stephen Shulman, Campaign Director, UJA of Greater Toronto.

“We are proud of our community that raised over $500,000 net, and counting, for UJA’s transformative projects and programs throughout Israel. We are proud of the more than 16,000 walkers who showed their pride in this community and our unbreakable bond with Israel. We are proud of our non-Jewish neighbours who came out in large numbers to celebrate Canada’s shared values with Israel, including the Premier of Ontario Kathleen Wynne, who officially started the Walk and spoke so eloquently. Last but not least, we are proud of our more than 400 volunteers, including the Walk Committee and especially the dynamic Walk Chairs – for a second straight year - Micki and Sam Mizrahi and Lauren Wise and Jamie Wise. UJA and the entire community owe a debt of gratitude to them.”