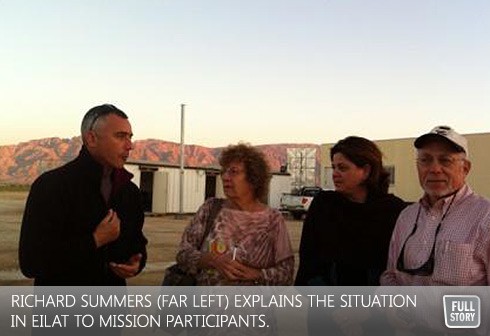 Richard Summers: "Life Goes On…But there is an Unspoken Unease…"

By Richard Summers--The distance rumblings of the current conflict in Israel seems to be getting louder in Israel’s southernmost city. Last Saturday we witnessed the an exodus of young men as the first wave of emergency call ups was issued by the  army, familiar faces are missing in Eilat, there is a constant flow of tanks and APC’s being transported  along the roads northwards towards the Gaza border. It doesn’t matter where you go radios and TV’s are tuned into the news channels.

Since the first day of this operation residents in the region have been holding their breath knowing it was just a matter of time before events of the previous months would be revisited, last night the prophecy was fulfilled as two blast were heard throughout the city, and this morning as the  children were rushing to get to get to school in time and parents were saying final farewells to their kids at gan another blast rang out in the streets of Eilat.

Luck is on our side the rockets fell short in the mountains surrounding the city and there was  no damage and no causalities, but we are all left with the feeling what will be to follow, Eilat still has no active warning systems, there is a feeling that we are entering into a game of blind Russian roulette, will the next rocket fall in the middle of one the  neighborhoods or on a school.

The distances between the border and potential launch sites are no more than a handful of kilometers and no one here is under the misconception that the Egyptians have the ability to prevent terrorist cells from shooting and disappearing back into the mountains of the desert on the Egyptian side of the border.

It’s difficult to explain the feeling here, on the one hand maybe the current situation of having no warning is preferable  to the idea of having to live with sirens and Zeva adom, the sirens  to us seem more traumatizing and will have a more devastating effect on  our city whose economy is almost totally reliant on tourism than the effect of a few rockets falling without warning in the outskirts of the city  but on the other hand no one really believes that we can be that lucky and that the over time these attacks will continue to miss their primary target the city of Eilat, and  how long can we ignore the reality that our schools  and ganim will have no warning if the worst occurs.

As I write this I can hear the kids in the school next my office playing outside, life goes on, we go to work, we go about our daily routines, but there is an unspoken unease, we each say an extra prayer, look to the sky s little more often and we are listening a little more intently to mountains that surround the city.

I wish all of us a peaceful day.