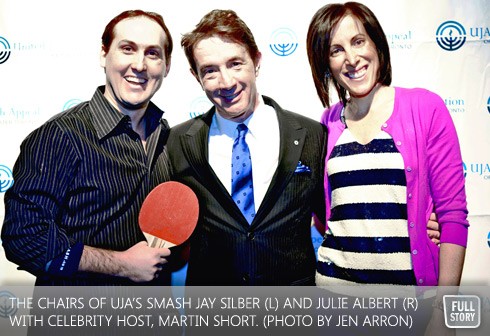 Check out the event photos here...

By Daniel Horowitz--More than 300 enthusiastic members of Toronto’s Jewish community made their way downtown on Thursday, March 1st to The Kool Haus, for an evening of celebrity schmoozing, great food and drinks, and a smashing ping-pong tournament.

“What could be a better goal than to help send kids to summer camp,” said Short, explaining why he chose to get involved. Short said that his own time spent at summer camp in the Kawarthas was extremely important.

Studies have shown that attending Jewish summer camps, or Jewish day camps, result in an increased Jewish identity and connection to Israel, not to mention the lifelong friendships that are formed between campers.

“I know many of us in this room, myself included, benefited so much from spending our summers at Jewish summer camp when we were growing up,” said Albert. “I know the friendships, memories and experiences from my camp years will stay with me forever and I’m sure it’s the same for many of you. That’s why this event is so important, and it’s so gratifying to know that, together, we are making a difference in the lives of many young people.”

“United Jewish Appeal wants to make sure that a Jewish summer camp experience isn’t out of reach for those kids whose parents might not be able to afford it,” said Silber.  “The money raised by the teams who are here tonight is going to those kids – to make sure they aren’t deprived of the same wonderful Jewish summer camp experience that so many of us enjoyed as children. Not only is summer camp fun, but it’s also invaluable in shaping kids’ Jewish identity, which is one of UJA’s primary goals.”