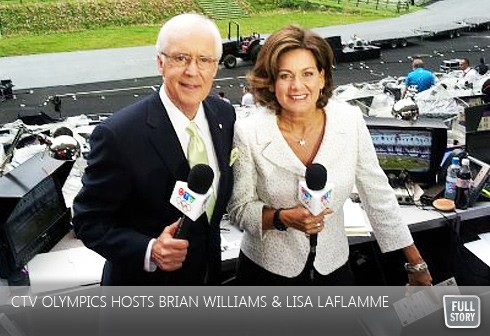 On July 27th, the Centre for Israel and Jewish Affairs - the advocacy arm of UJA Federation of Greater Toronto and other Canadian Federations - commended Canada’s Olympic broadcasters (CTV and Rogers Media Inc.) for their passionate stand, offered by hosts Brian Williams and Lisa LaFlamme during the opening ceremonies at the 2012 Games in London, in support of a moment of silence for the eleven members of the Israeli national team who were murdered in Munich in 1972.

"All Canadians can take great pride in our host Olympic broadcasters for paying tribute to the Israeli team members and their families," said David Koschitzky, Chair of the Centre for Israel and Jewish Affairs.

"We applaud them for taking this principled stand, in keeping with the highest ideals of the Olympic tradition. Indeed, the broadcast team’s remarks evoke a stark moral contrast with that taken by the International Olympic Committee – which incomprehensibly refused to hold a moment of silence,” said Koschitzky. “The murder of these athletes and coaches was an international atrocity that will forever scar the Olympic Games. In taking a moment to remember this event during the opening ceremonies, Canada’s Olympic broadcast team helped to ensure that the horrors of Munich will not be forgotten."

Below is a transcript of the remarks made by Williams and LaFlamme.

Brian Williams: And as Israel prepares, my position is well known and it is one that I have taken in previous Olympics. It is wrong that the IOC refuses to have a minute's silence for the Israeli athletes that were slaughtered in Munich. It is a much bigger issue this year, as it's the 40th anniversary of Munich. Members of the Canadian government, yesterday our Governor General, all calling for a moment's silence. Dr. Rogge says the ceremony is not the place to remember a tragic event, but - it's tragic - however it's one of the most significant and world-changing events in Olympic history. It absolutely should have been done here. The IOC worries about politics? This event is political by its very nature.

Lisa LaFlamme: The widow of one of the victims spoke out saying 'they came with dreams, they went home in coffins.' They want to be remembered here tonight.

Brian Williams: And remember - they died as Olympians.