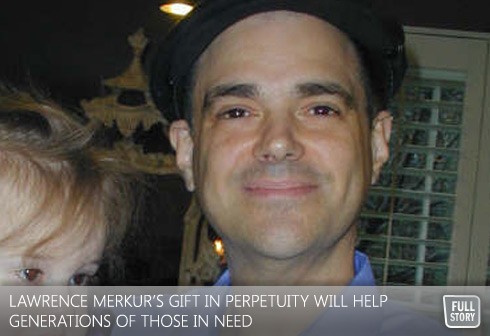 By Daniel Horowitz--When Toronto’s Lawrence Merkur passed away in 2008 at the age of 54, the somewhat reclusive and extremely compassionate man with a penchant for cats left an unknown fortune to Toronto’s Salvation Army, creating an unusual “marriage” of sorts.

The day after his death, it was discovered that Merkur, - an active and extremely successful trader in the silver market since 1990 - had amassed thousands of ounces of silver, worth between seven and eight million dollars.

Needless to say, his death had a silver lining for the Salvation Army and the tens of thousands of men, women and children among Toronto’s hungry and homeless individuals.

And, as fate would have it, thanks to Lawrence’s brother Ephry, Beth Tzedec’s Rabbi Baruch Frydman Kohl and UJA Federation of Greater Toronto, our city’s more than 20,000 vulnerable Jewish residents are also receiving the benefits.

“My brother, Lawrence, or Laurie, as I called him, was greatly affected by the death of his sister, Carol Merilly Merkur, who died in 1958 at just six months old,” said Ephry. “He was very sweet and caring, and the death of our sister, and later, the death of our father, really changed him. He became more introverted and lived a very, very frugal lifestyle. You would never know he had a nickel, let alone millions in silver. But that’s how he chose to live.”

In his will, Lawrence left his silver to the Salvation Army in trust, for perpetuity, meaning that it will continue to assist our city’s most vulnerable for generations to come. And, typical of Lawrence’s quiet lifestyle, he didn’t want to have his name attached to the gift – the largest single donation made to the Salvation Army in Canada. Instead, he wanted the donation to honour the memory of his late sister and a cousin who also passed away at age 11 in 1966, Sydney Eve Atin.

“The challenge was to figure out the best way that this donation could help Toronto’s vulnerable citizens,” says Ephry. “I suggested that perhaps a refrigerated truck carrying fruit and other foods to those who needed it, would be a good idea. That’s what we did, and today we have three huge trucks who continue to distribute food to the homeless.”

Another challenge confronting the Merkur family was how the Jewish community in need – more than 21,000 Jews in the GTA live at, or below the poverty line - could also benefit from Lawrence’s gift.

“I tried a number of Jewish organizations to help me, but with no luck,” says Ephry. “Then, I went to my rabbi, Rabbi Frydman-Kohl who connected me with UJA in 2010. It was a perfect fit. UJA was so organized and equipped to make this happen, while The Salvation Army was so amenable to our suggestions, and they purchased kosher food. It was around that time that the Pride of Israel food bank was on the verge of closing down. Just imagine the faces of those who, without warning, suddenly saw huge refrigerated trucks backing up at Beth Shalom, as pounds of kosher foods appeared out of nowhere. It was a pretty incredible and fulfilling sight to see.”

In 2011 alone, more than 100,000 pounds of kosher food was delivered through the Salvation Army to low-income Jewish families.

“This was a very unlikely Shidduch,” said UJA’s Kim Smiley, Director, Capacity Building for Social Services, UJA.  “It took over two years to materialize, but with Ephry’s persistence, we have collectively created a game changer in the field of poverty alleviation.  It was a chain of social change: Through Lawrence Merkur’s generosity to The Salvation Army; through Ephry Merkur’s connection to Rabbi Frydman Kohl; to the Rabbi’s connection to UJA Federation; to UJA’s partnership with local providers in the city which assist those struggling with poverty, including Pride of Israel’s Kosher Food Bank and the Food Bank at Beth Shalom.”

“Laurie has done so much more than help the needy- he has forged a relationship between interfaith organizations and community members who may have overlooked their common bonds in helping the poor,” says Jordan Atin, Lawrence’s first cousin, and an Estates and Trusts lawyer who took care of Lawrence’s will To do so in the name of two girls, his sister, Carol Merilly and my sister, Sydney Eve Atin, both of who died at very young ages, is a remarkable tribute."