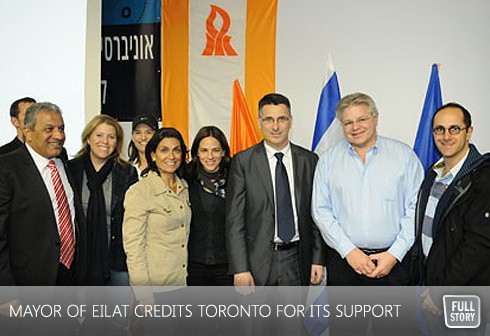 Mayor of Eilat Credits Toronto for its support

The Israeli city of Eilat – UJA Federation of Toronto's "partnered community" through its Partnership together initiative -- has been awarded the prestigious annual Israel Prize for Education.

The award was presented in Eilat by Israel's Minister of Education, Gideon Saar, to Dr. Drori Ganiel, head of Eilat's Education Administration, during the Eilat Day celebrations on February 29.  The event took place in the presence of senior leaders of UJA Federation of Greater Toronto, including the Board Chair, Elizabeth Wolfe; President & CEO, Ted Sokolsky; and the Incoming Annual Campaign chairs, Sarena Koschitzky and Bruce Leboff, who were in Israel as part of a fact-finding mission.

In accepting the award, the Mayor of Eilat, Meir Yitzhak Halevy, said that "the Toronto community has led the way with its support for Eilat's education system, and deserves much of the credit for this great achievement."

UJA Federation of Greater Toronto has contributed greatly to the development of educational services in Eilat. For example, Eilat’s Youth Futures program was launched seven years ago with UJA Federation support. Since its inception, the program has provided some 2,500 school children with educational opportunities previously unavailable in the region. Similarly, students at the Ben-Gurion University campus in Eilat who have received tuition scholarships from UJA Federation of Greater Toronto provide over 4,000 hours of voluntary mentoring.  These programs have played an important role in raising the matriculation pass rate of high school students in Eilat from 25% in 2001 to 72% in 2011.

“This award is a source of great pride for the citizens of Eilat,” said UJA Federation of Greater Toronto President & CEO Ted Sokolsky. “It is our privilege to partner with them in building their wonderful city on Israel's Southern Gate. UJA Federation's strategic investments in Education, Health and Innovation continue to make a real difference to that incredible community.”

Photo by By Sharon Schwartzman