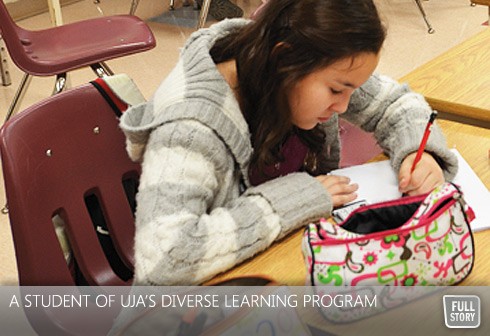 By Daniel Horowitz--There was no shortage of drivers, putters, wedges – or excuses – at this summer’s 12th Annual UJA Max Guttmann Memorial Golf Tournament.

Funds raised through the tournament, held at Pheasant Run Golf Club, support The UJA Diverse Learning Program (DLP), a groundbreaking program that allows children with diverse learning needs to reach their potential in a Jewish environment.

The DLP, which is housed at Associated Hebrew Schools, provides children with leading edge educational approaches and support in a communal environment.
From 1983 to 2008, the Abraham Shore She’arim Hebrew Day School addressed the needs of Jewish children requiring support that exceeded the capabilities of mainstream Jewish Day Schools.

Starting with the 2008-2009 academic year, UJA Federation partnered with Associated Hebrew Schools, Netivot HaTorah Day School and TanenbaumCHAT to create special classes to accommodate students that had been attending She’arim.

Supported by transition funding from UJA Federation, the schools worked together to adapt the She’arim model which now features students integrated in mainstream classes where appropriate. Currently, Associated Hebrew Schools has 20 children, or 2 classes, remaining in grades 6 to 8.

The more than 130 participants in this year’s tournament, which was chaired by Susan Eklove, brothers Craig and Sean Guttmann, Shelli Koenigsberg and Avi Wachsman, helped raise more than $85,000 for the Diverse Learning Program.

"We are very proud to continue this golf tournament in memory of our father, Max Guttmann z"l," said Craig. "Our father believed in investing in children when they are young.  He truly believed that he was saving lives and, being a Holocaust survivor, he understood how precious each life is.  And the proof is in the hundreds of graduates that have gone through the program.  We were saddened to see She’arim close, but we are so proud to work closely with UJA Federation which has given its complete support to ensuring that there would be a continuation of this dedicated community special education program."

Funds will ensure the continuation of high quality, customized education for children with special learning needs. In its previous 11 years of operation, the tournament has raised close to $600,000 in support of Jewish children with learning disabilities.

"This is an amazing model for learning," says Eklove, the mother of Ilan, a Grade 8 student in the DLP. "My husband and I are so grateful that Ilan is in a Jewish educational environment. Now that Ilan has seen that he can be successful, we honestly believe that the sky is the limit."

"The program is nothing short of fantastic, and it just keeps getting better," says Ellen Frischman Snyder, mother of DLP student Jordan. "Jordan is doing remarkably well and he feels good about himself. After many years of stress and concern, the program is giving us high hopes and we truly feel that we can see the light at the end of the tunnel."

A good time was had by all who took to the greens this summer at Pheasant Run Golf Club, with a wonderful day full of great golf, prizes, silent auctions, and sumptuous food, including a brisket and scotch station sponsored by Zuchter Berk Creative Caterers.