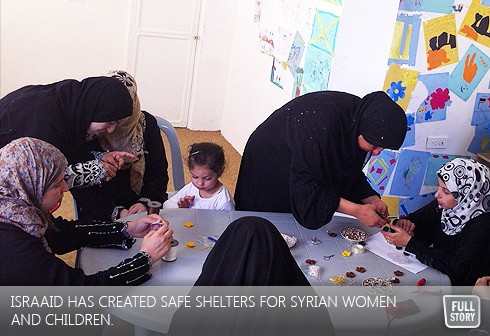 By Daniel Horowitz--As the possibility of a humanitarian crisis in southern Syria continues to brew amid escalating violence currently stranding thousands of would-be refugees trying to cross the border into Jordan, IsraAID is doing its part to help these innocent people.

A partner agency of UJA Federation of Greater Toronto since the 2005 Boxing Day Tsunami that devastated Southeastern Asia, IsraAID is an international non-governmental aid agency based in Israel that offers humanitarian assistance and sustainable solutions to communities in need around the world.

In light of the current intensified government bombing campaign that is obstructing road and paths throughout the region, the flow of refugees into Jordan has slowed to a trickle from a high of approximately 2,000 a day to an average of only 100, prompting a massive buildup on the Syrian side.

Members of IsraAID are currently working with local Jordanian partners to offer humanitarian aid to Syrian refugees crossing the border. Approximately 10,000 displaced people are said to have spent the past week in border towns and villages waiting to cross into Jordan.

Relief items are being distributed by IsraAID staff, including packages with hygiene kits and food.

IsraAID is also currently initiating three important programs; one of which is focused on the development of a safe shelter for women and children, as well as another that will provide all with recreational options.

The third program will provide much-needed trauma care for those who have been severely affected by the civil war.

"There are thousands of innocent Syrian men, women and children who, while seeking their freedom in Jordan, are currently stranded, due to an increase in government violence, without food or water," says Shachar Zahavi, Executive Director, IsraAID. "With the programs we are creating, IsraAID is providing them with basic humanitarian needs as they await a new lease on life in Jordan."