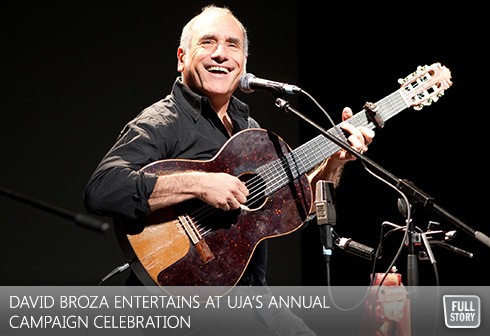 By Daniel Horowitz--In an emotional celebration of UJA’s Annual Campaign held at the Sheraton Centre last night, close to 800 members of Toronto’s Jewish community came together to pay tribute to our community’s leaders, volunteers, and to hear from two important, and very different, Israeli voices.

The evening’s featured speaker, Yossi Klein Halevi, a research fellow at the Shalom Hartman Institute, contributing editor to The New Republic, as well a frequent contributor to the op-ed pages of leading North American newspapers gave attendees some keen insights into the results of the recent Israeli national election, but not before sharing his feelings about Prime Minister Harper.

“I’d like to start by offering my thanks to the Government of Canada,” said Halevi.

“As an Israeli citizen who looks around at the international community and feels increasingly lonely, I can safely say that when we look towards Canada, we see a lone bright spot. I don’t think it’s an exaggeration to say that the government of Prime Minister Stephen Harper is Israel’s best friend in the world today.”

The Chairs of UJA’s Annual Campaign 2013 are Sarena Koschitzky and Bruce Leboff, as well as the Chair of UJA’s Women’s Philanthropy, Laurie Sheff.

“It is most fitting that this evening coincides with the celebration of Tu Bishvat last Shabbat,” Koschitzky told the crowd.

“Tu Bishvat is the New Year, Rosh Hashanah for the trees, and in Israel marks the beginning of spring. Tonight is a celebration in honour of our incredible volunteers, donors and community leaders whose will ensure the growth and continue to plant the seeds and deepen Jewish roots in Toronto.”

“In any fundraising campaign, the real engine that drives success is the volunteer canvassing team, more than 600 strong,” said Leboff.

“We have been fortunate to have very committed canvassers – they who share our commitment – and who gave generously of their most precious asset of all – their time. We have such committed donors.

In my own canvasses, I was struck by the most gracious generosity of so many people who make UJA their philanthropic priority – giving so generously - reflecting a deep trust in the incredibly important work of UJA Federation.”

“The women in Toronto understand the importance of the campaign to all of us and have worked tirelessly to ensure that this year those who need our support will receive it,” said Sheff.

“I have learned much from all of them and am truly humbled by their dedication and hard work.”

Then it was time for the evening’s main attraction, Israeli superstar singer/songwriter, David Broza, a native of Haifa.  Broza wowed the crowd with his unique and passionate performance, and, later, in a memorable finale, the J-Roots Children’s Choir, a number of UJA’s Makom Young Israel Emissaries, and UJA Campaign leadership, joined Broza on stage for an emotional end to the evening.