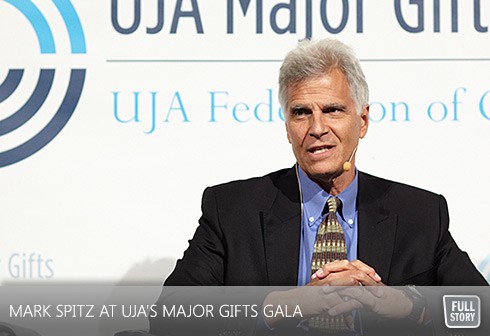 By Daniel Horowitz--“I became the greatest thing that happened in sports at the time, unfortunately, it was associated with one of the greatest tragedies of all time and, in a funny sense, it made me an even bigger name.”

Those are the bittersweet words of Mark Spitz, arguably the greatest Jewish athlete of all time who, at the 1972 Munich Olympics, won seven gold medals in swimming.

Forty years after the tragedy of the Munich 11, Spitz made the comments to more than 400 UJA supporters at its annual Major Gifts Gala, held at The Liberty Grand, at Exhibition Place.  The Gala was chaired by Barbara Bregman and Allan Leibel.  The evening, moderated by Elliotte Friedman of CBC’s Hockey Night in Canada, also included a moving address by Shaul Ladany, the lone male member of the 1972 Israeli Olympic Men’s Track Team who survived the Arab terrorist attack at the Munich Olympics that took the lives of 11 of his team members.

One of the top race-walkers during the 1960s and 1970s, Ladany set the world 50-mile record in 1972, shattering the existing world mark that had endured since 1935.  Oddly, despite being a major presence at the 1972 Olympics, Spitz didn’t find out about the tragic events that had unfolded at the Olympic Village, until the rest of the world did.

“I was taken on Monday night for dinner to a lovely restaurant in Munich by a photographer and writer for Sports Illustrated, both of whom had been close to my career for years,” recalled Spitz.

“I got back to the Village around midnight and went to sleep. I woke up around 8 a.m., had breakfast and went to the press centre for the usual press conference. That’s when I saw 2,000 or so members of the media asking questions, none about my swimming, when I knew something had happened. I was told about the terrible tragedy that had occurred.

Around 10:00 am, I made my way back to my room in the Village and when I walked in, Willy Brandt, the German Chancellor was there, and my dad showed up 20 minutes later. There was so much confusion, and we didn’t know if there were more terrorists disguised as athletes, and there was concern for my safety. “

It was a day that Spitz will never forget, as his life quickly turned into a real-life spy novel, complete with intrigue and quick getaways.

“At 5:00 pm, they had me and my coach in the back of a car, lying on the floor with a blanket covering us, taking us from the village to the airport,” said Spitz.

“We flew to London, and from there I flew to California. When I landed in Sacramento, I was met by Ronald Reagan and members of the Secret Service. The Secret Service remained with me for the next three months.”

Spitz was named World Swimmer of the Year in 1967, 1971, and 1972. In 1971, and became the first Jewish recipient of the James E. Sullivan Award, given annually to the Amateur Athlete of the Year. In bicentennial year 2000, Sports Illustrated named Spitz No. 33 on its list of the ‘Top 100 Athletes of the 20th Century.

The 1965 Maccabiah Games was Mark’s first international competition, and he returned to Israel in 1969, following the Mexico Olympics, to again compete in the Maccabiah. In all, Spitz won 10 Maccabiah gold medals.

In 2008, Spitz released a self-published book entitled, “The Extraordinary Life of an Olympic Champion.”  The book documents his journey from his early years to his lucrative Olympic career.

Watch a video from the event here.