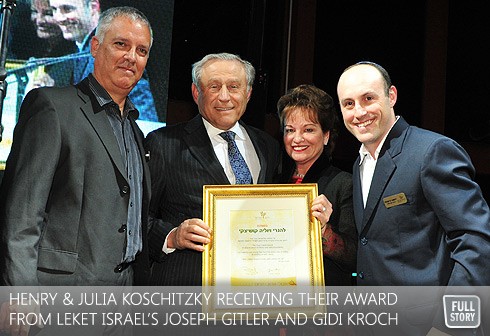 Henry and Julia Koschitzky received the illustrious honour from Leket Israel, the country’s largest food bank and food rescue network which, since its inception in 2003, has been actively working to alleviate the problem of nutritional insecurity among Israel's diverse population through the distribution of excess food to more than 60,000 needy Israelis daily.

Each year, with the help of 40,000 volunteers and dozens of paid workers, Leket Israel rescues over 700,000 hot meals, 90,000 loaves of bread and 13 million lbs of produce and perishable goods, for the benefit of the needy. In addition, Leket Israel supplies over 1 million (7,000/day) volunteer prepared sandwiches to underprivileged children from 100 schools in 25 cities. Food is reclaimed from hundreds of food suppliers and is then redistributed to nearly 300 partner NPOs assisting the poor, invalid-elderly, minorities, children, and at-risk population groups throughout Israel.

The evening, "From the Field to the Plate – The Right of All to Healthy Food" was dedicated to raising awareness and funding for Project Leket, gleaning fruits and vegetables for distribution to the poor.

Gidi Kroch, CEO of Leket Israel, addressed the guests and alerted them to the fact that the new poor is the growing middle class. "A family where two people are working but do not earn enough to put food on the table," said Kroch.

From 1992 to 1997 Koschitzky chaired the Keren Hayesod World Board of Trustees. Since 1990 she has been a member of the Board of Governors of the Jewish Agency for Israel and, since 1996, a member of the Agency Executive.

Among those in attendance at the Leket Israel’s Gala Dinner were Natan Sharansky, Ze'ev Bielski MK, and Ariel Maislos, the new general manager of Apple's memory division in Israel.