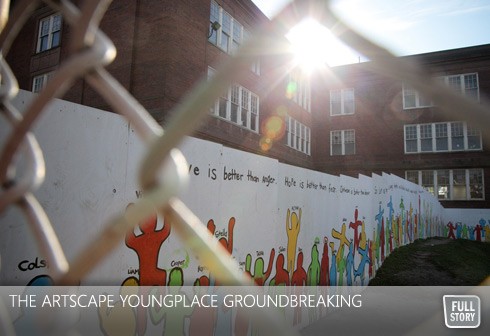 Arts and culture leader spreads its brand across the GTA

By Daniel Horowitz -- As part of its mandate to share its unique and second to none brand of arts and culture with the entire Greater Toronto Area, the Koffler Centre of the Arts is joining the Artscape YOUNGPLACE project, to open this fall.

The Koffler Centre of the Arts has signed a five-year lease with Artscape to inhabit a prominent space on the main floor of Artscape YOUNGplace at 180 Shaw Street, just north of Queen Street West, Toronto.

Upon completion, Artscape YOUNGplace will be a 75,000 sq. ft. centre for creative collaboration housing a diverse mix of creators working in a variety of disciplines, as well as arts, community and social mission organizations.

The Koffler’s growing repertoire of exhibitions and programs continue to be available across the GTA, from downtown up to Vaughan. Future Koffler Gallery exhibitions and related programs will be based at the Artscape YOUNGplace as the new Koffler building on Sherman Campus on Bathurst Street, just north of Sheppard, is constructed. Koffler programs continue at the Prosserman JCC on Sherman Campus and start at the Lebovic Campus in Vaughan also in fall 2012.

Living somewhat of a nomadic lifestyle over the last three years is nothing new to the Koffler, which has created off-site venues including Honest Ed’s, the Royal Ontario Museum, Olga Korper Gallery, Beaver Hall, the Kiever Synagogue, and more.

“While planning proceeds for a new Koffler Centre of the Arts on Sherman Campus, the next several years at Artscape YOUNGplace (AYP) are an amazing opportunity to build audiences and partnerships, solidifying our unique position with the constellation of arts organizations transforming Toronto as a global cultural urban centre,” said Lorri Starr, Executive Director, Koffler Centre of the Arts and Vice President, Culture, UJA Federation of Greater Toronto.

The Koffler Centre of the Arts, an agency of UJA Federation of Greater Toronto, is Canada’s only multidisciplinary, contemporary Jewish cultural institution, with a broad mandate to serve all and present a wide range of artistic programs through a global lens in a specifically Canadian context.