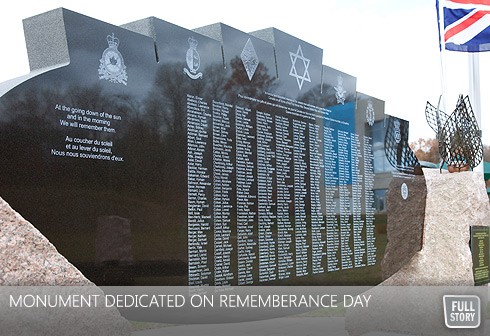 By Daniel Horowitz--During the anniversary week of the start of the Second World War in September 1939, Jewish Toronto honored her own soldiers who two generations ago took the first steps to ending Nazi and fascist terror.

On Sunday, September 11th, a groundbreaking ceremony for the installation of a monument honouring the Jewish men and women who died while serving in the Canadian Armed Forces during the First World War, the Second World War, and the Korean War, took place adjacent to the Prosserman Jewish Community Centre on Sherman Campus, located on Bathurst Street, north of Sheppard Avenue.

On Remembrance Day (November 11), the monument was officially dedicated outside, while inside the Lipa Green Centre for Jewish Community Services, more than 500 people, many of them veterans, took part in a emotional ceremony.

The eight-foot-long black marble monument – a joint effort between UJA Federation of Greater Toronto and The Jewish War Veterans, Toronto Post - includes an inscription from Laurence Binyon's Poem for the Fallen which reads: "At the going down of the sun and in the morning, we will remember them.”

The front of the monument – which was designed by the award-winning Canadian sculptor - James C. Smith – includes 570 names of the Jewish men and women who gave their lives while serving in the Canadian Forces during the 20th Century so that future generations may live in freedom.

In all, 1.5 million Jews, including 17,000 Canadians, served in the Allied Forces during the Second World War.

The monument was a labour of love for the three men who comprised the monument steering committee of The Jewish War Veterans: Chairman Amek Adler, Everett Blustein and Mike Brown.  The project took six years to come to fruition thanks to their perseverance, dedication, and a helping hand from UJA Federation of Greater Toronto.

"This day was a very long time in coming, but thankfully, it's here now, and I'm very, very proud," says Blustein, a native New Yorker who to describes himself as an American by birth, but a Canadian by adoption. "I fought in several wars and at one time I served in the 8th Armored Division under the command of General Patton. I had the pleasure of being the Master of Ceremonies at the September groundbreaking and I can tell you that there were definitely tears in my eyes. My brother served in the U.S. navy and has his name on a monument – as will I. We are all so proud that this day finally arrived and so thankful to UJA Federation for helping it come to fruition."