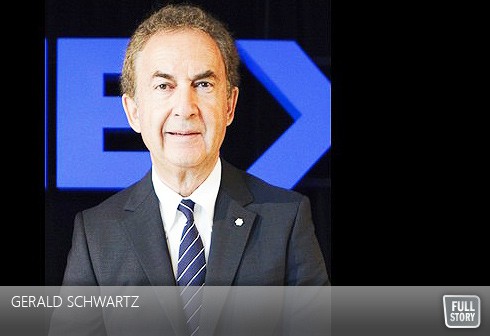 What a difference a day makes.

A 24-hour whirlwind of activity driven by a visit to Toronto by Dr. Miriam and Mr. Sheldon G. Adelson -  saw UJA Federation of Greater Toronto, the Birthright Israel Foundation of Canada along with some of Jewish Toronto’s community leaders come together and raise over $1.5 million for Taglit Birthright Israel.

A $1 million gift in support of the Canadian Birthright Israel initiative was made during a private meeting at Toronto’s Onex Corporation, by Gerald Schwartz, Chairman of the Board and Chief Executive Officer of Onex, and a generous philanthropist.

The meeting between Schwartz and Adelson was a shidduch, arranged by UJA Federation of Greater Toronto which supports Taglit Birthright Israel in Toronto through funds raised by UJA’s Annual Campaign.

“To play a role in an initiative as vital and transformative as Birthright Israel is an honour,” said Mr. Schwartz who was impressed by the research results including participants’ connection to Israel, increased in-marriage rates and a stronger sense of their Jewish identity. “I was inspired by Mr. Adelson’s remarkable commitment to these young Jewish adults” said Schwartz, “Taglit Birthright Israel has proven to be so important to their – and to our future”.

The meeting in Mr. Schwartz’s Onex office was part of a trifecta of sorts, as earlier in the day, Tony Cohen hosted the Adelson’s at a luncheon in his hotel Le Germaine. The intense 24 hours culminated with a special dinner held in the Adelson’s honour, hosted by community leaders, Julia and Henry Koschitzky where guests were captivated and inspired by Miriam and Sheldon Adelson’s personal stories. “I am so pleased by the support of our community members who came together that day to raise additional funds for this powerful program” remarked Debbie Kimel, chair of the Birthright Israel Foundation of Canada.

Since its inception in 2000, Birthright Israel has brought over 350,000 young Jewish adults to Israel from over 62 countries, including over 50,000 Israelis. To date over 27,500 Canadians have participated.