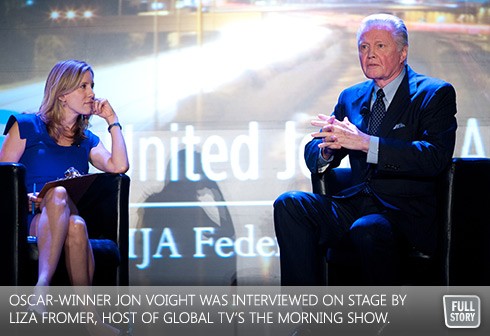 By Daniel Horowitz—“Israel is God’s gift to all mankind, because it is a sole reminder of the survival of the Jewish people.”  Those were the compelling words of screen legend and Oscar-winning actor Jon Voight, who made the remarks in front of the more than 1,000 people attending the launch of United Jewish Appeal of Greater Toronto’s Annual Campaign, held at Toronto’s Fairmont Royal York Hotel on August 21st.

Joining Voight on stage as moderator of the event was Liza Fromer, the Host of Global Television’s The Morning Show.  “After the slaughter of six million men, women and children,” Voight continued, “the survivors found strength in God to believe that they must find new land, new refuge and a new beginning, to keep the Jewish legend alive, to fulfill God’s promise that they are his Chosen and must never be driven to extinction.”  The heartfelt words of the star of such iconic films as Coming Home, Deliverance and Midnight Cowboy, brought the crowd to its feet, while bringing tears to Voight’s eyes.  UJA’s Annual Campaign, which has already raised more than $25.5 million from some 3,000 donors, is chaired by Sarena Koschitzky and Bruce Leboff, with Laurie Sheff at the helm of UJA’s Women’s Philanthropy.

Funds raised through the Annual Campaign allow UJA Federation to continue its mandate of taking care of our most vulnerable, building Jewish identity and education, standing with Israel and the Jewish world, and leading Jewish and Israel advocacy.

“I care deeply about the Jewish people, here in Toronto, Israel and around the world. I am passionate about this community and its future and I am not alone,” Leboff told the crowd.

“That passion is what drives Sarena, Laurie and I to work hard to deliver a breakout year in the campaign. I believe unequivocally that UJA is the only charity that addresses needs and concerns across our entire community and the entire Jewish world.

Together with the work of our partner agencies, the funds we raise collectively enable transformational change in the lives of Jews in need.”

“In just a few weeks Rosh Hashanah will be upon us,” said Koschitzky. “Rosh Hashannah is a time to reflect on all that we have to be so grateful for, and to give thanks. The Jewish way of giving thanks is not merely words of platitude, but a commitment to actions that will improve who and what we are. We reflect on what we as individuals and we as a community have achieved and we plan on how to do even better. I have learned by example about the empowerment that derives from our collective deeds, and about our common determination to ensure future promise.”

“I believe in this community, I am inspired by our compassion, conviction and values and I am not alone,” said Sheff. “Toronto is one of the great Jewish communities of the world. In fact UJA has the 3rd largest Annual Campaign in North America. We have unbelievable volunteers including a dedicated campaign executive team and more than 700 volunteer canvassers who act as ambassadors in spreading the story; and we have an incredible story to tell - one we hope you will share with your friends, family and neighbours with pride.”

Also addressing the crowd at the Campaign Launch – which was chaired by Richard Diamond and Naomi Rifkind Mansell - was the new Israel Consul General for Ontario and Western Canada, DJ Schneeweis.

Providing musical entertainment for the evening was Hagit Yaso, a 21-year-old from Sderot, Israel, a UJA partner community, and the winner of “Kochav Nolad”, Israel’s version of TV’s American Idol.