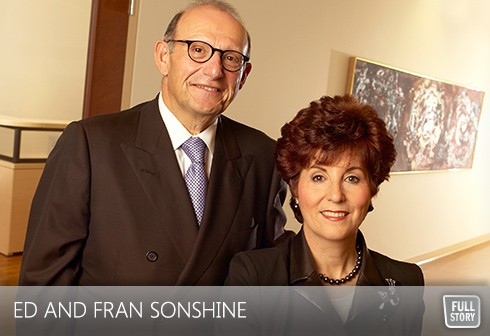 On the other end of the line was the voice of Gord Nixon, President and CEO, Royal Bank of Canada, informing Mr. Sonshine that he had just been named Canada’s Outstanding CEO of the Year.

“I knew that I had been nominated by somebody, but I quite frankly paid no further attention to it, because this award usually goes to some giant company,” says Mr. Sonshine.

Some would argue that RioCan REIT, which, under Mr. Sonshine’s consummate leadership owns and manages Canada’s largest collection of shopping centres and has evolved into the country’s largest real estate investment trust with an enterprise value of approximately $14-billion, qualifies as “giant”.

“I didn’t take it seriously that I had a chance; I just thought it was nice to have been nominated,” he says.

“And then, after I forgot about it, Gord called me with the news and there I was, sitting in my office, quickly going into shock.”

Unlike Mr. Sonshine, Fred Waks, RioCan’s President and Chief Operating Officer, was not surprised by the honour bestowed on his friend and partner.

“Ed is a great mentor who leads by example; and everything he does, I, and others at RioCan aspire to do,” says Mr. Waks.

“Being Eddie’s wingman for 18 years, I can say that this honour is well deserved. Think about it; Ed’s in the real estate business, he’s Jewish, he’s an immigrant, yet, in the entire country, he’s the number one guy right now. Sometimes people don’t get what they deserve, but in this case, nobody deserves it more than Ed.”

For those counting, Mr. Sonshine is the second Jewish CEO to be awarded with this prestigious honour, following in the footsteps of The Four Seasons Founder, Isadore “Issy” Sharp, who was named in 1992.

"Ed was chosen because he has done a remarkable job building, growing and leading one of Canada's largest and most successful real estate companies and because he is universally admired and respected as an individual and community builder,” says Mr. Nixon.

“The fact that he is so well liked by everyone is just icing on the cake."

And despite the acclaim, Sonshine is quick to point out that he is only as good as his employees.

“This is very much a team award,” says Mr. Sonshine.

“You can be the greatest leader you want, if I didn’t have the right people getting the job done, it’s not going to work. So, to me, the award is about recognition of our whole team. And, the fact that I’m being recognized as the outstanding CEO is a validation of something I started 20 years ago.”

Despite his success, as a Jew born to Holocaust survivors in a Displaced Persons Camp in Bergen Belsen, Mr. Sonshine often felt like an outsider in the business world.

“I just felt like I didn’t really belong,” he says.  “Part of it was being a Jew in Toronto; part of it was being a child of survivors. My background has affected me over the years in many, many ways, some good, some bad, but my experiences growing up have certainly had a strong impact.”

And Mr. Sonshine has also had a strong impact, not only in business, but on Toronto’s Jewish community. He, like wife Fran, is a Past Chair of UJA of Greater Toronto’s Annual Campaign, and he continues to play a a vital role with UJA and other important Jewish charities across the GTA as a generous philanthropist and volunteer.

“There are a lot of vital Jewish organizations in this community, but there is only one that encompasses 100 partner agencies, and that is UJA,” says Mr. Sonshine.

“It is the only one that can galvanize the entire community in the case of extraordinary events. Whether it was the Yom Kippur War in 1973, when I made my first donation to UJA, or the Lebanon war in 2006, it’s UJA Federation that the community gathers around. It’s the only organization that can truly take on a leadership role. It’s also UJA Federation that takes on the responsibility of maintaining, improving and operating the infrastructure of the Jewish community.”

“Ed's leadership inside and outside the Boardroom has inspired a new generation of community builders to dream more and do more,” said Ted Sokolsky, President & CEO, UJA Federation of Greater Toronto.

And, yes, as the old adage proclaims, behind every great man there is a great woman.

“Fran has been the perfect mate in every way,” says Sonshine.

“People see us the way we are today, with me as the CEO of a $14 billion operation, but for the first 25 years of our marriage, I was just a hard working Jewish guy like everybody else, trying to provide for my family. Also, Fran is a much nicer person than me. I tend to be a little focused, aggressive, and blunt. She’s made me a much better person, not just publically, but as a CEO. She’s the best.”