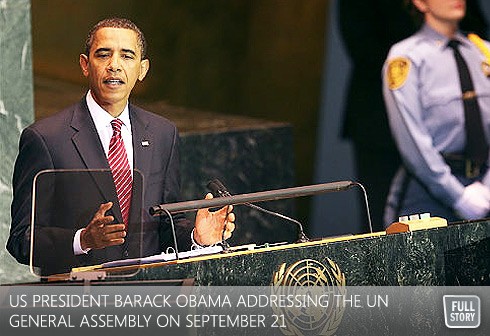 In our ongoing efforts to keep Jewish Toronto updated on this week's critical events at the UN, please read the attached exact transcript of U.S. President Barack Obama's address to the United Nations this morning in which he addressed the Israel-Palestinian question.

Mr. President, Mr. Secretary-General, fellow delegates, ladies and gentlemen: I would like to talk to you about a subject that is at the heart of the United Nations – the pursuit of peace in an imperfect world.

War and conflict have been with us since the beginning of civilization. But in the first part of the 20th century, the advance of modern weaponry led to death on a staggering scale. It was this killing that compelled the founders of this body to build an institution that was focused not just on ending one war, but on averting others; a union of sovereign states that would seek to prevent conflict, while also addressing its causes.

No American did more to pursue this objective than President Franklin Roosevelt. He knew that a victory in war was not enough. As he said at one of the very first meetings on the founding of the United Nations, "We have got to make, not merely a peace, but a peace that will last."

The men and women who built this institution understood that peace is more than the absence of war. A lasting peace – for nations and individuals – depends upon a sense of justice and opportunity; of dignity and freedom. It depends upon struggle and sacrifice; on compromise, and a sense of common humanity.

One delegate to the San Francisco Conference that led to the creation of United Nations put it well – "Many people," she said, "have talked as if all we had to do to get peace was…to say loudly and frequently that we loved peace and hated war. Now we have learned that no matter how much we love peace and hate war, we cannot avoid having war brought upon us if there are convulsions in other parts of the world."

Each nation must chart its own course to fulfill the aspirations of its people, and America does not expect to agree with every party or person who expresses themselves politically. But we will always stand up for the universal rights that were embraced by this Assembly. Those rights depend upon elections that are free and fair; governance that is transparent and accountable; respect for the rights of women and minorities; and justice that is equal and fair. That is what our people deserve. Those are elements of a peace that lasts.

Moreover, the United States will continue to support those nations that transition to democracy – with greater trade and investment, so that freedom is followed by opportunity. We will pursue a deeper engagement with governments, but also civil society – students and entrepreneurs; political parties and the press. We have banned those who abuse human rights from travelling to our country, and sanctioned those who trample on human rights abroad. And we will always serve as a voice for those who have been silenced.

Now I know that for many in this hall, one issue stands as a test for these principles – and for American foreign policy: the conflict between the Israelis and Palestinians.

One year ago, I stood at this podium and called for an independent Palestine. I believed then – and I believe now – that the Palestinian people deserve a state of their own. But what I also said is that genuine peace can only be realized between Israelis and Palestinians themselves. One year later, despite extensive efforts by America and others, the parties have not bridged their differences. Faced with this stalemate, I put forward a new basis for negotiations in May. That basis is clear, and well known to all of us here. Israelis must know that any agreement provides assurances for their security. Palestinians deserve to know the territorial basis of their state.

I know that many are frustrated by the lack of progress. So am I. But the question isn't the goal we seek – the question is how to reach it. And I am convinced that there is no short cut to the end of a conflict that has endured for decades. Peace will not come through statements and resolutions at the UN – if it were that easy, it would have been accomplished by now. Ultimately, it is Israelis and Palestinians who must live side by side. Ultimately, it is Israelis and Palestinians – not us – who must reach agreement on the issues that divide them: on borders and security; on refugees and Jerusalem.

Peace depends upon compromise among peoples who must live together long after our speeches are over, and our votes have been counted. That is the lesson of Northern Ireland, where ancient antagonists bridged their differences. That is the lesson of Sudan, where a negotiated settlement led to an independent state. And that is the path to a Palestinian state.

We seek a future where Palestinians live in a sovereign state of their own, with no limit to what they can achieve. There is no question that the Palestinians have seen that vision delayed for too long. And it is precisely because we believe so strongly in the aspirations of the Palestinian people that America has invested so much time and effort in the building of a Palestinian state, and the negotiations that can achieve one.

America's commitment to Israel's security is unshakeable, and our friendship with Israel is deep and enduring. And so we believe that any lasting peace must acknowledge the very real security concerns that Israel faces every single day. Let's be honest: Israel is surrounded by neighbors that have waged repeated wars against it. Israel's citizens have been killed by rockets fired at their houses and suicide bombs on their buses. Israel's children come of age knowing that throughout the region, other children are taught to hate them. Israel, a small country of less than eight million people, looks out at a world where leaders of much larger nations threaten to wipe it off of the map. The Jewish people carry the burden of centuries of exile, persecution, and the fresh memory of knowing that six million people were killed simply because of who they were.

These facts cannot be denied. The Jewish people have forged a successful state in their historic homeland. Israel deserves recognition. It deserves normal relations with its neighbors. And friends of the Palestinians do them no favors by ignoring this truth, just as friends of Israel must recognize the need to pursue a two state solution with a secure Israel next to an independent Palestine.

That truth – that each side has legitimate aspirations – is what makes peace so hard. And the deadlock will only be broken when each side learns to stand in each other's shoes. That's what we should be encouraging. This body – founded, as it was, out of the ashes of war and genocide; dedicated, as it is, to the dignity of every person – must recognize the reality that is lived by both the Palestinians and the Israelis. The measure of our actions must always be whether they advance the right of Israeli and Palestinian children to live in peace and security, with dignity and opportunity. We will only succeed in that effort if we can encourage the parties to sit down together, to listen to each other, and to understand each other's hopes and fears. That is the project to which America is committed. And that is what the United Nations should be focused on in the weeks and months to come.

Now, even as we confront these challenges of conflict and revolution, we must also recognize once more that peace is not just the absence of war. True peace depends upon creating the opportunity that makes life worth living. And to do that, we must confront the common enemies of human beings: nuclear weapons and poverty; ignorance and disease. These forces corrode the possibility of lasting peace, and together we are called upon to confront them.

To bring prosperity to our people, we must promote the growth that creates opportunity. In this effort, let us not forget that we have made enormous progress over the last several decades. Closed societies gave way to open markets. Innovation and entrepreneurship has transformed the way we live and the things that we can do. Emerging economies from Asia to the Americas have lifted hundreds of millions from poverty. Yet three years ago, we confronted the worst financial crisis in eight decades. That crisis proved a fact that has become clearer with each passing year – our fate is interconnected; in a global economy, nations will rise, or fall, together.