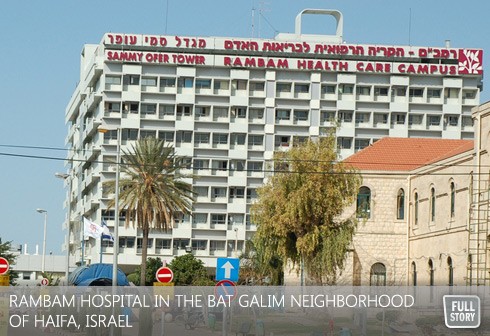 Haifa, 24 September 2012   Conflicts continue in the South while children from Gaza are being saved in the North   Communicated by the Rambam Hospital Spokesperson

While tensions continue to escalate in the South, a group of children from Gaza Strip are receiving critical treatment at Rambam Medical Center, an establishment that offers medicine ‘without borders.’

As rockets continue to be fired from the Gaza Strip,  aimed at the communities of Southern Israel, four young residents of Gaza are receiving critical treatment in Northern Israel. The four individuals, who are nephrology patients suffering from kidney insufficiency, have been hospitalized for several months in the Children's Hospital at Rambam Health Care Campus, where they have been receiving lifesaving therapy while awaiting kidney transplants.

Several months ago, three of the children – Mohamed and Hadeel (both 12), and Hadeel's brother Ahmad (15) – arrived at Rambam in serious condition. Since then, they have gone from hemodialysis treatments, in which blood is cleaned via an artificial kidney, to peritoneal dialysis, administered through the abdomen. The latter treatment is performed overnight, enabling the patients to eventually lead more active lives during the day. Soon, for the first time in three years, these children will be able to go back to school and lead somewhat ‘normal’ lives. The fourth youngster, six-month-old Lian, is still being treated with hemodialysis, appropriate for her current medical condition.

Now that their conditions have improved, the three schoolchildren are due to be released to their homes: Mohamed within the next few days, and siblings Hadeel and Ahmad shortly afterwards. In the meanwhile, their families have been spending time with the staff of Rambam's Pediatric Nephrology Unit, under the direction of Professor Israel Zelikovic, learning how to perform peritoneal dialysis themselves.

"Peritoneal dialysis is preferable for children because it can be performed by an automated dialysis device at the child's home, in his natural surroundings," said Zelikovic, regarding the method's advantages. "The treatment is performed at night while the child sleeps, which frees him for regular activities during the day. It also makes possible better nutrition and metabolic balance and reduces the burden on the heart and blood vessels."

According to Head Nurse of the Pediatric Nephrology Unit, Mahdi Tarabia, who has been escorting the families during their stay at Rambam, until now it has been impossible to receive peritoneal dialysis in the West Bank and Gaza. "The hemodialysis treatment that these children were given before their arrival at Rambam was associated with medical complications, resulting in a worsening of their condition and many hospitalizations," he explains.

"Now, these families have the skills to administer peritoneal dialysis, which represents a significant improvement in the children's circumstances and will enable them to function almost normally." The families will receive the equipment required for peritoneal dialysis and the solution used with it from Teva Pharmaceuticals, which will convey it to Erez Checkpoint.   Tarabia also refers to the cooperation between the Pediatric Nephrology Unit at Rambam and the medical authorities in Gaza and the West Bank as beneficial, as both respectively have the children's best interests in mind.

Over the past year, the Pediatric Nephrology Unit at Rambam Medical Center has cared for dozens of Palestinian children from the West Bank and Gaza with various kidney diseases.

The Unit, which specializes in dialysis for infants and small children, has performed over 4,000 dialysis treatments this year.