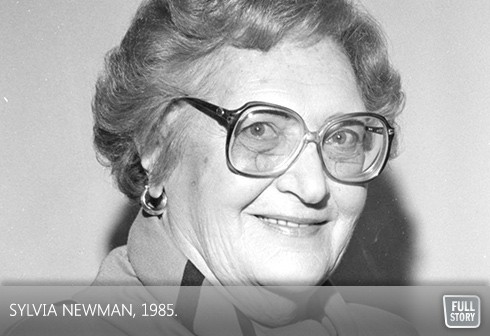 By Daniel Horowitz--It takes a special kind of drive, commitment and belief in what one does for a living in order to work at the same place for almost half a century.  It also takes a very special kind of person.

Fortunately for the Jews of Toronto, and for UJA Federation, Sylvia Newman, was that kind of woman.  Sylvia, who passed away on June 19th at the age of 92, started as a secretary with UJA Federation in 1951 where she immediately displayed her uncommon passion and talents, eventually leading her to the position of Director of UJA’s Women’s Division. She would continue at UJA until her retirement in 1999.

“She was the powerhouse behind UJA’s Women’s Division, and a driving force as a leader of women in the Jewish community, totally committed to UJA and the Jewish people,” said Brenda Cooper who worked with Sylvia since 1997.

“She was a very special woman; way ahead of her time. I was proud to call her my friend, and I will miss her.”   Since news of Sylvia’s death spread, a veritable “who’s who” of Jewish Toronto leadership has shared their feelings about this incredible woman.

“Sylvia was my first real introduction to fundraising,” said community leader Julia Koschitzky. “She taught me everything I know. She was honest and straight forward. You knew exactly where she stood on all issues. She kept you motivated, inspired and focused. She was a devoted passionate professional who made her lay leaders look good. I saw her recently while she was convalescing and she never lost her spunk - her humour and her special unique take on life. I owe her a great debt of gratitude for teaching me the ABC’s of communal leadership. May her memory be for a blessing.”

“Sylvia was a consummate professional,” said Adrienne Offman, a Past Chair of UJA’s Women’s Campaign.

“The most important accomplishment to her was the success of the women she mentored.  She never attributed success to herself- it was always one of her many chairmen and their cohorts. One of her endearing qualities was the depth of her knowledge.  If she saw a Jewish woman on the street to say Hello, she could in an instant tell you the woman's financial contribution to the cause and whether, in her opinion, it was appropriate. That being said, any contribution was met with gratitude and grace by her. Sylvia’s 90th birthday party was attended by almost all of her chairman- a testimony to the influence her love and guidance had on all of our lives.”

“I remember that she approached me the year before I became Chair of the 1995 Women’s Campaign and told me that she had heard that I was a hard worker and she hoped that I would live up to my reputation,” said Barbara Bank.

“And, as hard as I worked, Sylvia worked longer and harder.  For so many of us, she became the mother we longed to please with an upgrade, a new pledge, and the greatest triumph of all – a new Lion.  Sylvia never suffered fools.  She was honest, direct, and loyal to her Chairs.  We could not have asked for a better teacher, leader and friend.”

“Sylvia was the real deal,” said Ted Sokolsky, President & CEO, UJA Federation of Greater Toronto.  “She was a gritty and passionate natural born leader. Her drive and mentorship ignited a cadre of multi-generations of great leaders who, collectively, have had a profound effect on Jewish Toronto. All of us who worked with Sylvia could only feel humbled by her knowledge and skills in fundraising. She radiated with drive and leadership and we all learned to step aside and let her lead the charge. Our community will continue to benefit from the seeds she planted over all those years.”