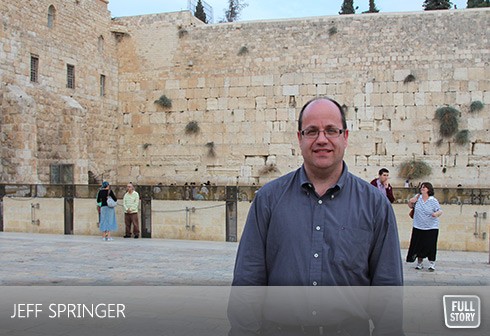 Ceasefire brings “Both Relief and Frustration” to the people Israel

On November 18th, UJA Federation of Greater Toronto quickly organized and implemented an Israel Solidarity Fly-In to demonstrate, in person to the people of Israel our support during what has been a particularly difficult time for the Jewish State, especially for those living in the Southern region of the country. One of the ten Toronto participants on the Fly-In was Jeff Springer, UJA Federation’s Senior Vice-President, Corporate Affairs, who forwarded some of his thoughts to his UJA Federation colleagues on November 21.

As the ceasefire has taken hold, although some rockets continue, there is both relief and frustration here in Israel.

Most of the people that we have spoken to, including from the south, believe that a ground operation was necessary to make a difference in the current situation.  With a ceasefire, they believe that it will only be a matter of time, probably not too long, until the rockets return.

There were even demonstrations yesterday demanding a ground operation.  We can only hope and pray that the ceasefire will hold long enough to give residents of the south some well deserved relief and time to recover.

We had a very meaningful day today.  Among our stops was a visit to Keftzuba, a wonderful playground/amusement park, with over 2,000 children from the area within 7 km of the Gaza border.  Over the past few days, the Jewish Agency (JAFI) has brought almost 17,000 children to the centre of the country to have a day of fun and relief from the rocket attacks.

At Kefzuba we met with Youth Future trustees that were present along with their kids and presented them with a duffle bag of toys donated by Spinmaster for their children in Sderot, Ofakim and the Eshkol regional council.  What we saw the most were smiles on the faces of the children and many of their parents.  Speaking to a parent whose home was hit yesterday, she could not be more thankful to have this day with her kids where they could release their tension and just be kids.

The Respite program run by JAFI includes the bus, security, medic, admission to the park and lunch.  JAFI has also been giving $1,000 per family whose house was hit by a rocket and more if there was a injury.  In addition, JAFI has been providing emotional and trauma counselling.

In the photo below you see children shooting foam balls at each other.  I can attest they have good aim as I got beaned twice in the head.  A small price to pay....

He thanked us repeatedly for being there and for donating candy packages for soldiers at the Gaza border.  He actually choked up while speaking almost breaking down.  He was so thankful for the letters written in hebrew by students at Associated Hebrew Schools Kamin campus.

He encouraged us to write a letter including our email as there have been occasions where soldiers contact the writer and have a lifelong relationship.  It was quite emotional for him and for us.   Next, a former resident of the absorption centre now in the reserves spoke about how important JAFI programs for lone soldiers (he was from Belgium) meant to him.

The two soldiers, one from the States and the other from France, spoke to us as well thanking us for being there and telling us how important these packages are for the soldiers.  I also spoke briefly on how honoured we were to be there with them to do a mitzvah and to provide a link between Toronto and Israel because we are one people with a common destiny.

The olim and us then attached the letters to the candy and packaged it up for delivery to the soldiers that hopefully got them today.  We took lots of pictures and genuinely created a connection today.  It was very meaningful and emotional for me especially since we thought there could be a ground operation.  One of the soldiers thought there should be one even though he or one of his friends could get hurt.

The mission has come to an end and despite the exhaustion I could not imagine not being here during this time.  We have sent a very clear message to Israelis by our presence:  We care and we will be with them no matter the circumstance.  Unfortunately the hotel was pretty empty as other groups cancelled but we can be proud that we came to say:  Hineni - here I am.  I am very proud of our UJA Federation community.

The work done by JAFI, funded by our relief funds, has truly made a difference to the lives of thousands on the confrontation line.  We are doing holy work and we can be sure that our efforts have not gone unnoticed both at home and in Israel.