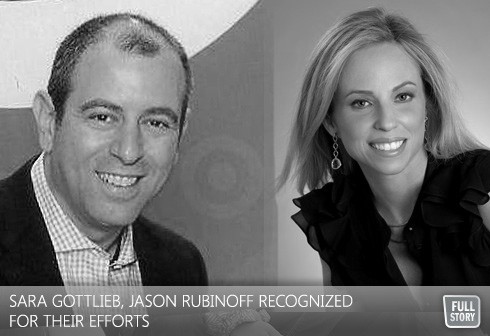 By Daniel Horowitz--Each year, Jewish Federations of North America (JFNA), which represents 155 Jewish Federations and over 300 independent communities across the continent, recognizes young leaders who are making an important statement and commitment through their activism and generosity of time, spirit and resources on behalf of the Jewish people, and in particular, in service of their Federation communities.

This year, two volunteers who lend their passion and talents to UJA Federation of Greater Toronto and by extension to Jewish Toronto – Sara Gottlieb and Jason Rubinoff - were named as two recipients of JFNA’s prestigious Young Leadership Award.

“That our community, and JFNA as a whole, recognize the importance of developing future leadership is wonderful, and that I have been recognized as someone that leads by example is extremely flattering,” said Gottlieb, the mother of two young boys, who has served on the Board of UJA Federation, is a member of its Israel and Overseas Committee, and is the current Co-Chair of UJA’s Women’s Philanthropy Lion of Judah Division, and much more.

”I was fortunate to have been raised in Toronto’s vibrant Jewish community in a home where a sense of Jewish identity and pride was instilled from a very young age through Jewish education, trips and study in Israel. My parents and grandparents led by example with a strong commitment to volunteering and tzedakah.”

"I am inspired everyday that I look at my children and know that I need to do my part to ensure they are part of a vibrant Jewish community here in Toronto and throughout the world," explains Rubinoff, also the parent of two young boys, and a member of JFNA’s Cabinet and current co-chair, Keren Hayesod International Young Leadership Board.

Rubinoff has also held several important leadership positions throughout Canada’s Jewish community, including his role as Chair, past Young Leadership and General Business Campaigns for UJA of Greater Toronto.

“Community is a vibrant collection of dedicated individuals.  I'm grateful for receiving this award and to be able to work with so many talented like-minded people, working together to build a stronger community," says Rubinoff.

“We are delighted and proud that Sara and Jason have been recognized for their outstanding efforts on behalf of the Jews of Toronto, Israel, and the world,” said UJA Federation of Greater Toronto President & CEO, Ted Sokolsky.

“UJA Federation of Greater Toronto, as well as our entire community, can be very proud of their leadership and their continuing role of engaging other emerging leaders from Toronto.”