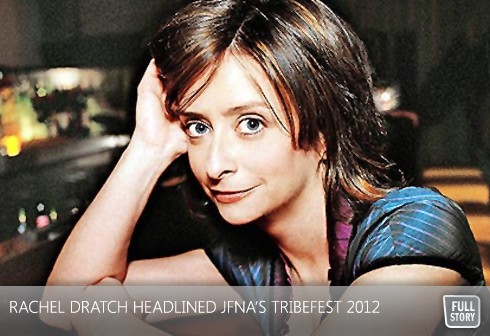 “Convening with other Jews is one of the most important things we can do to keep Judaism alive,” comedian and former Saturday Night Live star Rachel Dratch told the audience recently at The Jewish Federations of North America’s (JFNA) TribeFest 2012.

Dratch’s comments were met with passionate cheers from more than 1,500 young Jews from around North America, including Toronto, who came to the Venetian Hotel in Las Vegas to be part of a groundbreaking event aimed at engaging the next generation of the Jewish community.

TribeFest 2012, which ran from March 25 to 27, offered thought-provoking, inspiring programming on politics, philanthropy, business, entertainment and culture in the Jewish world. Participants heard from headliners like Dratch, best-selling humorist and author A.J. Jacobs and Olympic gold-medal swimmer Lenny Krayzelburg, and listened to stories of people whose lives have been transformed by the collective impact of Jewish Federations and other organizations.

Through social media like Facebook and Twitter, TribeFest’s enthusiasm prompted more than 50 people to register – some for just one day – after the program had already begun.

“It's been an amazing couple of days,” said TribeFest Co-Chair and the man representing UJA Federation of Greater Toronto, Jason Rubinoff. “We all came to TribeFest to be a part of the same Jewish tent. We have seen that there are so many ways to become more involved, and strengthen our communities, our connection with Israel and our Jewish identities.”

Speakers ranged from celebrities like Dratch and Jacobs to Jewish innovators and social activists. Jonny Imerman and Rochelle Shoretz spoke of their respective organizations to help Jewish cancer patients. Hadas Malada-Matsree, an Ethiopian-Israeli, told her story of becoming a medical officer in the Israeli Air Force. Filmmaker and lawyer Brooke Goldstein and former Israeli journalist Stav Shaffir presented about their experiences in social activism.

Other speakers touched on their own Jewish journeys, such as 17-year-old Talia Leman, whose sense of Jewish community and Tikkun Olam led her to found RandomKid to help empower youth across the globe. “When we believe in the power that we each have,” she said, “we have the greatest power of all.”

Many of the sessions offered strategies for TribeFest participants to implement in their own communities. “Next Gen in the Shark Tank,” inspired by ABC’s “The Shark Tank,” for example, featured a contest for the most innovative program aimed at engaging young adults. Other sessions highlighted successful programs in communities around North America.

“We were able to get information on programs that we can use to inspire people in our community,” said Len Grabovsky of Indianapolis, who plans to start a community garden at his Federation upon returning from TribeFest. “Instead of just a food pantry, people can have a hands-on role in our efforts.”

The program also stressed Jewish community service, including one morning when more than 600 young people awoke early to deliver backpacks filled with over 6,000 books to young children in the Las Vegas public school system through a service project sponsored by PJ Library and the Jewish Federation of Las Vegas.

Rachel Wright of Detroit, TribeFest co-chair, emphasized TribeFest’s goal of encouraging Jewish communal life. “We’re really just getting started at TribeFest,” she said. “This was an opportunity to see what's out there in the Jewish world, and how you can take advantage of it all. Now we want participants to take some of what they've seen here, heard here and experienced here, and apply it to their own lives.”

After three days in the desert, JFNA President and CEO Jerry Silverman hoped the event would meet its goals of bringing more voices to the Jewish communal table. “It is not about just being at TribeFest,” he said. “It is about taking the energy, the conversations and the excitement and bringing it home. It is there where the real work begins, and we are counting on you to make it happen.”