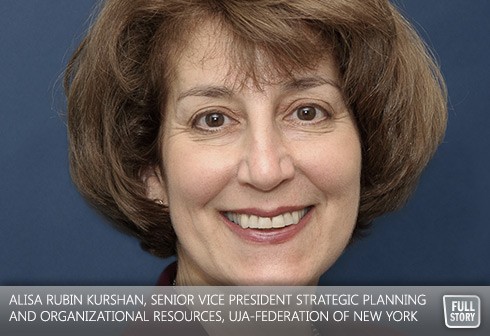 Dedication of staff despite personal challenges “an inspiration”

By Daniel Horowitz--As a new storm began its assault on New York City and other parts of the Northeastern United States on Wednesday, November 7 just a week after Hurricane Sandy tore a path of death and destruction across the same part of the world, Alisa Rubin Kurshan spoke with pride about the vital role UJA Federation of New York is playing in Sandy’s aftermath.

“This is what UJA Federation is all about,” said Rubin Kurshan, Senior Vice President  Strategic Planning and Organizational Resources, UJA-Federation of New York, as she surveyed the worsening weather outside her office window.

“With our network of more than 100 agencies, we have the opportunity – with community centres, councils, and human service agencies - to deliver food to homebound seniors in their adult daycare programs and connect families to the New York Legal Assistance Group for advice on insurance claims. We have volunteers literally going door-to-door, delivering food, blankets and flashlights. There are so many people who are still without power and who have lost all of their possessions. Our agencies are where they need to be, and doing what they need to do, and they do it the best.”

For those of us watching the tragedy from a safe distance on television is one thing but quite another when directly immersed in the unthinkable. And, just how do the employees of UJA Federation of New York devote their time to helping strangers when they, and their families, are faced with the same peril?

“My staff was here, in the office, all weekend, despite not having power in their own homes,”  explains Rubin Kurshan who, herself, only saw the return of her power on November 6th. “The dedication of our staff is truly unbelievable and inspirational. But, the truth is, we don’t feel as though it’s difficult. We honestly feel privileged to be able – in our professional lives – to make a difference and to help people. We are very fortunate to be able to do the work that we do.”

According to Rubin Kurshan, UJA Federation is particularly effective because it has the ability to galvanize the resources of its donors, many of whom are volunteering across the city, including the busloads of Women’s Philanthropy members as well as its Emerging Leaders and Philanthropists group who volunteered downtown last weekend.  And, thanks to social media, word spreads pretty quickly these days.

“We also had a challahthon last Friday where we used Twitter to ask people to deliver a challah for the elderly to our offices by noon the next day,” says Rubin Kurshan. “We received 800 challot which we were able to send out with the FEMA meals to the elderly Jews in time for Shabbat. We’re doing it again this Friday, and with the help of Jewish day schools, I think we’ll do more than 800.”

And, in a perfect example of “giving back”, in the early days of the intifadah, UJA Federation of New York gave four $25,000 grants to fours small agencies in Israel that worked in the field of psycho-trauma. Little did UJA Federation know then that those four grants would be the beginning of what is today the Israeli Trauma Coalition, which is now 60 agencies strong and a world-renowned expert in psycho trauma support.

“After Shabbat last weekend, I turned on my computer and saw an email from the head of the Trauma Coalition, Taly Levanon, saying that was coming to New York the next week to help in any way she can,” explained Rubin Kurshan. “And, true to her word, she is now in New York where she is conducting seminars for all of our frontline workers to try and help them through the really difficult, traumatic experiences they’ve undergone the last 72 hours.”

It’s been said that sometimes it takes the worst to bring out the best in people, and clearly, Rubin Kurshan, is impressed with what she’s seen over the past ten days.

“Everybody has something to say about the New York Jewish community,” she says, “And all I can say is that I am so lucky to live in one of the most dynamic, caring and expansive Jewish community anywhere on this side of the ocean.”