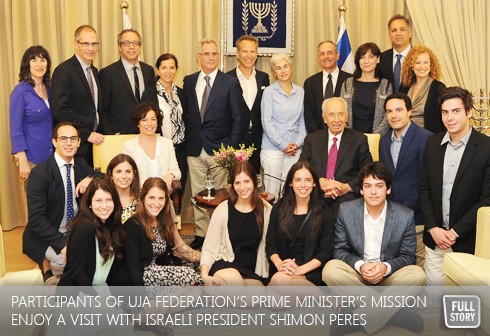 By Daniel Horowitz--With a virulent rise of extreme right-wing anti-Semitism currently sweeping through Europe, a UJA Federation of Greater Toronto delegation recently took part in its Prime Minister’s Mission to Budapest and Israel.

Consider that Jobbik – Hungary’s Anti-Semitic, ultranationalist party - currently holds 17 per cent of the seats in Parliament and runs paramilitary organizations that terrorize Jews and Roma (pejoratively known as Gypsies) throughout the country, while Greece’s Golden Dawn party and the Ukrainian ultranationalist party Svoboda are clearly anti-Semitic, the situation is quickly worsening.

And it’s not only Hungary’s 100,000 Jews who are being targeted, as,  according to Hungarian officials, Roma Hungarians are also being victimized by antiziganism, prejudice against Roma people,  The UJA Federation delegation, comprised of staff and lay leaders including the Chairs of UJA’s Annual Campaign 2014 – Stephen Diamond and Lisa Draper, and the Chair of UJA’s Women’s Philanthropy Lori Rosenthal, visited a number of UJA-supported initiatives, created to ensure that the young Jews of the region grow up with strong and proud Jewish identities.

The delegation also participated in the World Jewish Congress (WJC) briefing and discussion on the Anti-Semitic resurgence.  Another highlight of the mission – chaired by Fred and Linda Waks -  included a special dinner at which participants heard from leaders of Camp Szarvas, which is funded by UJA of Greater Toronto, along with the Ronald S. Lauder Foundation and the American Jewish Joint Distribution Committee.

Nestled on the banks of the beautiful Koros River in the peaceful resort town of Szarvas, Hungary, Camp Szarvas camp has not only facilitated opportunities for Jewish life, but has been the catalyst of Jewish identity for countless campers, counselors, and senior staff. Hailing from more than 20 countries, Szarvas participants celebrate many aspects of Jewish culture and religious tradition, including Shabbat, text study, and a beautiful Havdalah service (concluding Shabbat prayers) by the river. The camp is dedicated to pluralism, ensuring that Jews of all denominations are welcomed.

Participants also met with staff members of Minyanim Group, Tikkun Olam, MASA and the InterGeneration programs, a group of young leaders, supported by UJA of Greater Toronto, who are leading innovative projects in Hungary.  In Israel, mission participants visited a number of UJA of Greater Toronto’s transformative projects in Bat Yam, home to the fastest growing Ethiopian-Israeli community in Israel. Mired in poverty, UJA is working to enable the newest Ethiopian immigrants in Bat Yam to have a smoother and faster integration into Israeli society.

In Jerusalem, mission-goers enjoyed a visit with Israel’s President, Shimon Peres, after which, they visited Amigour Sheltered Housing for the Elderly, a UJA-supported facility geared towards the needs of Israel’s low-income elderly immigrants. The facility enriches their quality of life while ensuring that residents live their lives in the comfort and the dignity they deserve.