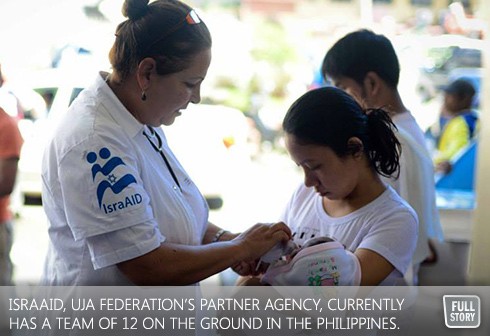 By Daniel Horowitz--More than a week after Typhoon Haiyan struck the Philippines, killing at least 3,700, a team of 15 professionals from IsraAID: The Israel Forum for International Humanitarian Aid, remain on the ground in the affected area, bringing aid to survivors.

Currently, members of IsraAID, UJA Federation of Greater Toronto’s partner agency, are located in Ormoc’s Ipil District, home to more than 30,000 individuals, where they are distributing humanitarian goods including food, water and hygiene kits to thousands of families who have lost most of their belongings.

“IsraAID has also established a new field outreach clinic in partnership with UNICEF, The US Navy, the Shai Fund and local government officials, among them Ipil's mayor,” says Shachar Zahavi,  Founding Director of IsraAID. “Our team is also coordinating its efforts with Israeli Government Officials and the IDF field hospital.”

As the news of the typhoon spread, United Jewish Appeal of Greater Toronto quickly established the UJA Philippines Typhoon Relief Fund, with one-hundred percent of funds raised going to support IsraAID’s efforts in the Philippines.
The UJA Relief Fund has so far raised more than $90,000.