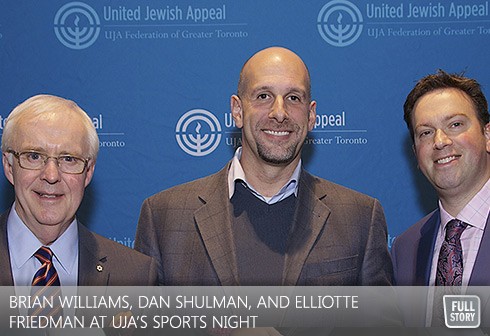 By Daniel Horowitz—Approximately 300 members of the GTA’s Jewish community came together on Sunday night, December 9th, to join UJA of Greater Toronto in paying tribute to CTV/TSN sportscaster, and a veteran of 14 Olympic Games, Brian Williams, for his courageous stand in support of the 11 Israeli athletes and coaches murdered during the Munich Olympics in 1972.

The enthusiastic crowd, which braved freezing rain to be part of this important evening, were entertained by the troika’s uncanny sports knowledge, and even had the chance to try and stump them with their own sports trivia questions.

Part of UJA’s Sports Night, which featured a panel of sports experts including Williams, ESPN’s Dan Shulman, and Elliotte Friedman of CBC’s Hockey Night in Canada fame, the highlight of the evening was an award presented to William’s for his moral stand that saw him announce, live on the air, his displeasure with the IOC’s decision not to hold a moment of silence for the Munich 11 during the opening ceremonies of this year’s London Games. This year’s Olympics marked the 40th anniversary of the murder of 11 Israeli Olympians by Palestinian terrorists at the Munich games.

“I’m a bit embarrassed to be honoured for doing what is simply the right thing,” an emotional Williams told those in attendance. “My 97-year-old father has a great expression, ‘The hottest places in hell are reserved for those who, in times of crisis, remain neutral.’ And for me, this is a crisis. The Olympics are supposed to be about integrity, sportsmanship, fair play. Ignoring any remembrance of the slaying of – and I used the word slaughter on the air – of Israeli athletes is anything but fair. I remember when the Georgian luger had been killed in a horrific accident up at Whistler, during the 2010 Winter Games in Vancouver. As they should have, they held a moment of silence for this lone luger. It was absolutely the right thing to do. But, when you do that and refuse to honour the 11 slain athletes and coaches, something is very wrong. To me, the fact that they were ignored is because they were Israeli, and to me, a Roman Catholic, it was important for a non-Jew to take a moral stand. I’m honoured to be here tonight, and I’m honoured that you remember me, but more importantly we must all, whatever our religion, and whatever our beliefs, we must always remember the Israeli athletes and coaches who were slaughtered,”

Another highlight of the evening were the heartfelt, appreciative words of Larry Tanenbaum, the Chairman of Maple Leafs Sports & Entertainment, who, unable to attend, sent his thoughts via video.

“It is appropriate that, as we stand in the light of the Chanukah menorah, we honour this man who shed light on this travesty, and, who helped ensure that the horrors of Munich will never be forgotten,” said Mr. Tanenbaum. “If you’re like me, you took a tremendous amount of pride in Brian’s principled stand, a stand which, in keeping with the highest ideals of the Olympic tradition, also illustrated perfectly, the stark moral contrast with that taken by the IOC. Brian’s inspirational and courageous public stand was a jarring and powerful moment of broadcasting, wedged in juxtaposition to the light and entertaining fare that preceded it and followed it.”

The event, which took place at the new Leo and Sala Goldhar Celebration Centre, Shirley Auslander Hall, on Vaughan’s Joseph and Wolf Lebovic Jewish Community Campus, highlighted the work of UJA’s Annual Campaign 2013, chaired by Sarena Koschitzky and Bruce Leboff who spoke about the importance of holding a major UJA event in York Region.