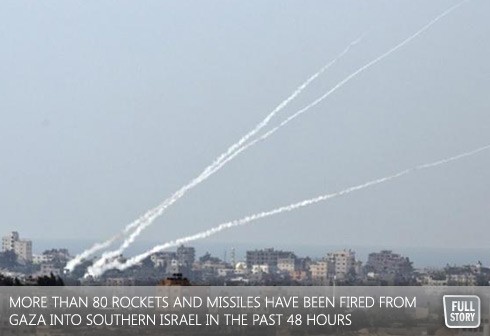 From Yossi Tanuri, Director General, UIA Canada:  Many of you have been hearing news reports about Sderot over the past few days. It is very difficult to truly understand and feel what the people in the region are experiencing on a daily basis, even for us, only one hour away.

Below is an account I received by our friend in Sderot, Eddy Azran, whom many of you have met over the past few years:   October 24, 2012   Today has been a day of increased tension for many Israelis.  For us in the South, it’s been just another day of our emergency “routine”.  Rocket fire from Gaza into Sderot and the surrounding communities just did not stop.

Even during “quiet” periods, at least once a month the terror organizations in Gaza remind us, and indeed the whole country, that peace has not yet reached our region.  The rocket fire indeed increased this morning, but this is our reality.  Sderot and the communities alongside the Gaza Strip have been on Israel’s southern frontline for 12 years.

President Obama chose to recall his visit to Sderot during this week’s debate with Mitt Romney because Sderot is a symbol of an intolerable reality, of impossible parenting.

At the same time, it is a place of heroism in the face of the terrorist threats.  We are all Sderot.  My day started at 4 a.m., when my five-year-old daughter came into our bed and settled next to me, after asking if I had heard the booms.  Earlier, I had made sure to bring our dog into the house.  The dog hears the rocket fire before anyone else, and has been traumatized ever since a missile fell near our house and shattered the windows.

Now, as soon as there is even the slightest sound of shooting, she barks incessantly until I go to sit with her.  And thus I found myself falling asleep, with one arm around my daughter and one arm around the dog.  At 6 o’clock, I received a text message telling us that the school bus would pick up at 9:10 instead of 7:30.  We all know that the terrorists shoot mostly when adults and children are no longer at home, so if shooting is expected, the times are changed.  Sure enough, at 7, rockets began to fall across the region, from Ashkelon to Eshkol.

The rockets were accurate and deadly.  Five mortars fell on one of the kibbutzim, damaging four houses.  Unfortunately, the Iron Dome missile defense system is not effective against mortar shells and short-range missiles.  Then only bomb shelters provide protection, and indeed anyone who took cover in a reinforced space was safe.  Two workers in a chicken coop who didn’t have time to run to the shelter were seriously injured.  A policeman was lightly hurt.  Naturally, after such a massive barrage of missiles, we got another text message telling us that school had been cancelled.  Classes at the Sapir College were also suspended.  Parents immediately began re-organizing their days, since in every family one would have to stay home.

On our kibbutz, three parents volunteered to run activities in the shelters for all the elementary school children.  This arrangement enabled all the other parents to leave for work at 9:30.  Kindergartens were open as usual since they are well protected, and children get there individually rather than by bus.

Indeed, the weakest link in our system of protection is when 50 children are together on a school bus.  The buses are not reinforced, and a random hit on a bus, whether it is moving or waiting at a stop, could result in a tragedy that hardly bears thinking about.  Every morning, those minutes are the hardest – the time when my eight-year-old daughter gets on her bus to ride to school.  If there is shooting during that time -- which has happened more than once in recent years – the sense of helplessness is simply paralyzing.  The only thing that we in the South can hold on to is our community, whose strength is actually our ability to survive.

We know that if the terrorists don’t shoot at us, they’ll start shooting at other cities.  As part of Israel's existence, our mission is to bravely stand up to any threat and to maintain normal and creative lives, to educate our children, to work for our survival, and to hope for a better future.