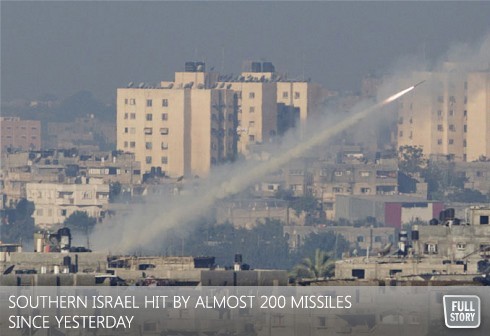 The Israel office of The Jewish Federations of North America is closely following the continued severe violence in the South of Israel, which has escalated after the targeted killing of Hamas terrorist and kidnapper, Ahmed Jabri, yesterday, Wednesday, November 14.

Rockets have been hitting Southern Israel since Saturday, with 196 missiles fired since the Israeli military operation began yesterday. This morning, Thursday, a Grad missile hit an apartment in Kiryat Malachi, killing Aharon Smagda, a 40-year-old father of three, Yitzchak Amselam, 22, and Mirah Scharf Cohen, a 25-year-old pregnant mother of three, and injuring others, including two infants, one of whom, 8-months-old, is in critical condition.  Yedidah Halevy, ZAKA Commander and volunteer in Kiryat Malachi, rushed to help. "I heard the explosion and ran in the direction of the smoke.

Other ZAKA and MDA volunteers arrived with me [and we] began to treat the injured. ZAKA volunteers continued their sacred work of dealing with the bodies and collecting human remains, despite another Code Red alarm.” Five rockets were fired at the city and intercepted by the Iron Dome defense system while emergency teams assisted the wounded.

Prime Minister Netanyahu has said, "Hamas and the terror organizations decided to escalate their attacks on the citizens of Israel over the last few days. We will not accept a situation in which Israeli citizens are threatened by the terror of rockets. No country would accept this, Israel will not accept it."

JFNA strongly condemns the terrorist activity against Israel and offers its support throughout this crisis. Michael Siegal, Chair of The Jewish Federations of North America says, “Since this past weekend, citizens of Israel’s south have been targeted by yet another rocket barrage by terrorists in the Gaza Strip, that have put more than one million Israeli civilians under a state of siege. We call on the international community to condemn such unprovoked violence and vigorously defend Israel’s right to protect itself and its citizens from further harm.”

“These latest unprovoked attacks follow years of unrelenting terror that has forced so many Israelis to live in a constant state of fear -- conditions which no country would tolerate,” added Jerry Silverman, president and CEO of JFNA. “We proudly stand shoulder to shoulder with the people and state of Israel during this difficult time and pray that such attacks will soon end.”

The Ministry of Foreign Affairs has provided information on the military operation including figures on Palestinian ceasefire violations since the end of Operation Cast Lead which was four years ago. The IDF is providing frequent English updates with videos.  There is a cyber-battle taking place simultaneously, with Hamas publicizing pictures of civilians injured in Syria's civil war on Twitter and claiming they are images of those harmed by IAF airstrikes over Gaza. The IDF has also been informing Gazan residents of impending airstrikes by dropping leaflets overland throughout the day. The Arabic leaflets urge to "take responsibility and avoid being present in the vicinity of Hamas operatives and facilities and those of other terror organizations that pose a risk to your safety."

A center for coordinating public diplomacy efforts has been opened in an effort to spread Israel's message and counter the delegitimization of its actions. Public Diplomacy and Diaspora Affairs Minister Yuli Edelstein said, "We are here in order to expose the unbearable reality of the residents in the south and the necessity for military action against Hamas and the [other] terrorist organizations. I am certain that alongside us will stand tens of thousands of activists in Jewish communities around the world."

Missiles have reached Kiryat Gat, Ashkelon and Ashdod, showing the far reach of this violence. Over 12,000 rockets have been fired at Israel from Gaza in the past 12 years and the missiles reach further across the country each time.  Our historic partner, The Jewish Agency for Israel, is preparing relief for youth in the South and will move ahead with activities once it has received permission from the Home Command. Relief for professional staff is also being planned as well as psych-social work at absorption centers in the South. $1,000 is being given immediately and directly to all whose homes have been damaged by rockets.

The American Jewish Joint Distribution Committee is holding emergency meetings on how best to assist the populations in the South. The Israel Trauma Coalition is working with professionals in the field and is making an assessment of the situation. Emergency arrangements are being coordinated with RAHEL and the Government of Israel.

World ORT is coordinating an emergency response. World ORT Director General and CEO Robert Singer said, "Extra-curricular activities provided through the Centre of Excellence in Kiryat Gat will be held in the communal air raid shelter. While we hope for the best we are prepared for the worst.”

Otzma participants due to go to Netivot and Ofakim yesterday have been taken to Arad instead. The participants in Kiryat Gat have been fully briefed on how to find shelter.

University students have been evacuated from their dormitories and sent home, and all within 40 km of Gaza have been ordered by the Home Front Command to remain in shelters until further notice. Some do not have access to shelters and are therefore stuck to the safest place they can find – for many that is the communal stairwell in their apartment block. The Barzilai hospital in Ashkelon is moving patients into an underground bunker in readiness.

The South of the country is dealing with life put on hold in all aspects. Weddings are being moved to safer locations, even though no one will turn up, and citizens in the North are offering their homes for respite to the rocket-battered residents of the South. The Home Command is advising all not to travel to the South. Reserve soldiers are being called up for action.

JFNA and Federation leaders were scheduled to convene today to discuss the situation.