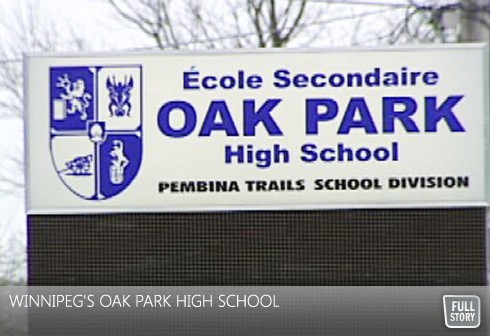 Centre for Israel and Jewish Affairs Responds to Shocking Attack

By Daniel Horowitz--Winnipeg police are currently investigating an incident at a Winnipeg high school involving a student with Nazi links who reportedly used a lighter to burn the hair of a female Jewish student.

The disturbing incident, which took place at Oak Park High School, in the quiet community of Charleswood, apparently also saw the 15-year-old boy make anti-Semitic slurs toward the 15-year-old girl.

The school became aware when the girl told a counsellor what happened three days later.

The male student involved in the incident was immediately suspended and has withdrawn from the school while the girl continues to attend the high school.

Police say a charge of assault with a weapon will be laid against the 15-year-old suspect who was arrested and released on a promise to appear in court at a later date. Further charges could be pending.

"This is a shocking act of violence that must not be tolerated,” said Shelley Faintuch, Associate Director, Local Partner Services for The Centre for Israel and Jewish Affairs.  "The allegation that the attack may have been motivated by antisemitism makes it of special concern to the Jewish community, but in actual fact, an attack like this affects all communities. We know Winnipeg to be a multicultural and diverse city where acts of violence such as this are rare.”

The Centre for Israel and Jewish Affairs is the advocacy arm of UJA Federation of Greater Toronto and other Canadian federations.

"We are pleased that Oak Park High School did the right thing by suspending the student in question and we will be reaching out to the administration to offer our assistance with their educational effort to prevent any further attacks,” said Faintuch. "We are also encouraged that the Winnipeg Police Service is taking this matter seriously and that this case is being handled by senior members of the Crown Attorney's office. We have full confidence that all relevant factors will be taken into account and that they will send a strong message that any act of antsemitism or racism will not be tolerated and will be punished to the full extent of the law."