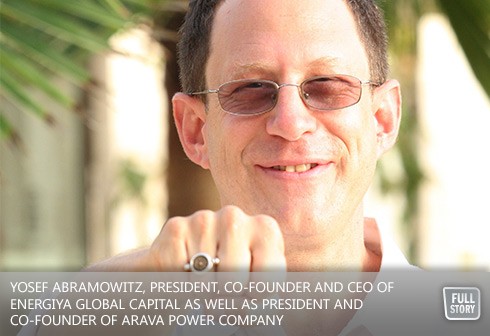 By Daniel Horowitz--Named by CNN as one of the top six Green Pioneers worldwide, Yosef Abramowitz, dubbed “Captain Sunshine”, the President of the Arava Power Company and Energiya Global, took time out of his hectic schedule to meet with the lay leaders and staff of UJA Federation of Greater Toronto last week.

Arava Power is Israel's leading solar developer and a pioneer in mid-size and large-size solar fields. Arava Power built the first grid-connected solar field in Israel and recently closed on $204 million for the next eight solar fields in Israel, with a further $1.5 billion worth of projects in the pipeline. Energiya Global develops affordable solar projects worldwide, with the goal of providing clean electricity for 50 million people by 2020.

Israel’s dependence on foreign energy highlights the need for homegrown energy alternatives, and is one reason why the region of Eilat/Eilot’s remarkable strides as a world leader in solar energy production and renewable energy innovation are more important than ever.

Working with its partners in Eilat/Eilot when the concept of renewable energy was little more than a dream, UJA Federation funded the entire strategic plan to make it a reality as part of its overall, strategic goal of strengthening Israel’s frontier.

Five years ago, UJA Federation began sponsoring Eilat’s Annual Renewable Energy Conference which, ultimately, brought together Siemens and the Arava Power Company, the folks behind Kibbutz Ketura. And, with its eyes looking to the future, UJA also invested in the region’s elementary and high schools, adding renewable energy to their respective curriculums, equipping students with the tools they need to eventually take jobs in the field if they so choose.

“Solar power in Israel wouldn’t have happened in Israel without the support of the UJA Federation of Greater Toronto,” wrote Abramowitz on his Facebook page last week.

“We should be proud as a Federation that our Israel & Overseas Committee leadership backed the entrepreneurial spirit of the people of Eilat and helped make this bold initiative possible,” said Ted Sokolsky, President & CEO, UJA Federation of Greater Toronto.

Abramowitz made his appearance at two UJA Federation events just as word had spread that a consortium of drivers led by the solar energy entrepreneur will buy Better Place, the bankrupt Israeli electric car company.

The consortium, made up of owners of Better Place cars, will purchase the company’s Israeli assets for less than $5 million and its intellectual property in Switzerland for less than $7 million, according to Israeli reports.

The consortium plans to keep open 15 Better Place charging stations and to employ at least 50 people. The Times of Israel reported that Abramowitz wants to make the car company a national infrastructure project, which would provide it with benefits.  Founded in 2007, Better Place declared bankruptcy in May after losing $800 million.