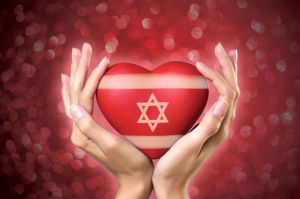 The Mishna (Ta'anit 4:8), surprisingly enough, proclaims, "There were no greater holidays for Israel than Tu B'av and Yom Kippur, for on them the girls of Jerusalem used to go out in borrowed white dresses ... and dance in the vineyards. What would they say? 'Young man, lift up your eyes and see what you choose for yourself...' ".

Tu B'Av is a holiday devoted to singles. In earlier times the young single women would go out to the fields dressed in white. Each woman would wear a dress borrowed from another so that those who were too poor to have dresses of their own would not be shamed. Then the men would come down to the fields and pick a bride.
After the destruction of the temple and the exile of the Jewish people the holiday was rarely celebrated, but with the establishment of the modern state many Kibbutzim adopted the day as a sort of Jewish Valentine's day. People once again wore white and danced in the fields and the vineyards.

Tu B'Av is also a day on which a number of restrictions on women were lifted. Though usually the separation between men and women was closely guarded, on Tu B'Av men and women were allowed to intermingle freely. Women were not forced to hide themselves away, to cover themselves to avoid attracting (and distracting) men. This was a day for flirting and attraction. The women's own innate sense of modesty was enough and did not require additional external reinforcement.

In the Torah, at the request of the daughters of Zelapachad women were given some inheritance rights, but only on the condition that they did not marry outside their tribe. This restriction was lifted on Tu B'Av after which women were permitted to marry whomever they wished.

In the time of the Judges there was a civil war between the tribes. The women of the other tribes were forbidden from marrying into the tribe of Benjamin. This restriction too was lifted in Tu B'Av. In both these two cases, as well as lifting restrictions on women, Tu B'Av was a day when the tribes were reunified.