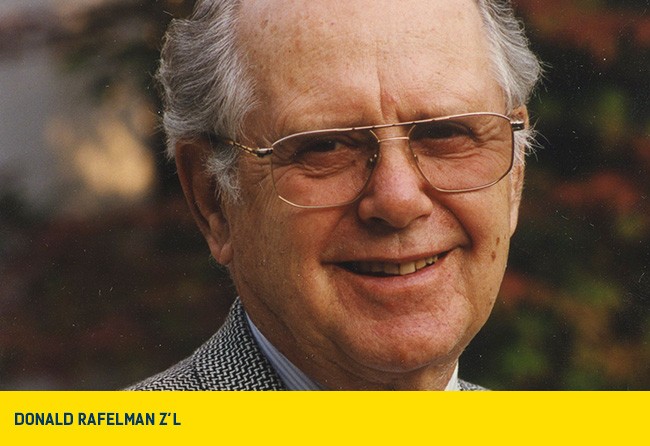 By Daniel Horowitz--When the Six-Day War broke out in 1967, Toronto’s Donald Rafelman experienced a Jewish awakening of sorts; an epiphany that ultimately led to him becoming an important leader within Toronto’s Jewish community.

Until that time, Mr.  Rafelman z”l, who passed away in December leaving behind his beloved wife of 66 years, Elaine, had admittedly never felt that connected to Jewish life. But the idea that Israel’s survival could be in peril changed everything.

“The idea that Israel may not exist woke me up,” Mr. Rafelman wrote in his Book of Life story for the Jewish Foundation of Greater Toronto. “It was from that time forward that I became much more involved in the community and developed a more haimish feeling as a Jew.”

After the war, Mr. Rafelman immersed himself in Jewish Toronto through a number of volunteer roles, including his stint as the Co-Chair, along with Julia Koschitzky, of United Jewish Appeal’s 1989 Annual Campaign, as well as with Baycrest.

“Don was a passionate and proud reform Jew,” says Mrs. Koschitzky. “Together as co-chairs we represented the different spectrums of the community.  I had enormous admiration and respect for his commitment and his vision to reach out to the entire community. It was also the 40th anniversary of the state of Israel which added great significance to the year. Don gave it all he had, determined to "Make a Difference” - the theme for that year - and Don made a difference in countless ways.  Working together with Don was such a positive, uplifting experience. My husband Henry and I were proud of the friendship forged with Elaine and Don through our community engagement. Our friendship continues 28 years later. One of my fondest memories is the year working with Don when, not only did we work hard, but we had a great time creating memorable moments that will remain with us forever.”

And as much as the community gained from having Donald Rafelman roll up his sleeves on their behalf, he felt that he too gained from the experience.

“We met many wonderful people along the way who were enthusiastic and so deeply committed,” wrote Mr. Rafelman. “They further inspired our own feelings regarding tzedekah and Israel, which we visited often.”

And, like true visionary leaders, Mr. Rafelman knew the importance of looking to the future as far as the global Jewish community was concerned.

“We share this message with our children and grandchildren,” he wrote. “They know that it is not enough for them to count on what their parents or grandparents have established. They must step up on their own. It would disappoint us if they missed out on that experience for themselves.”