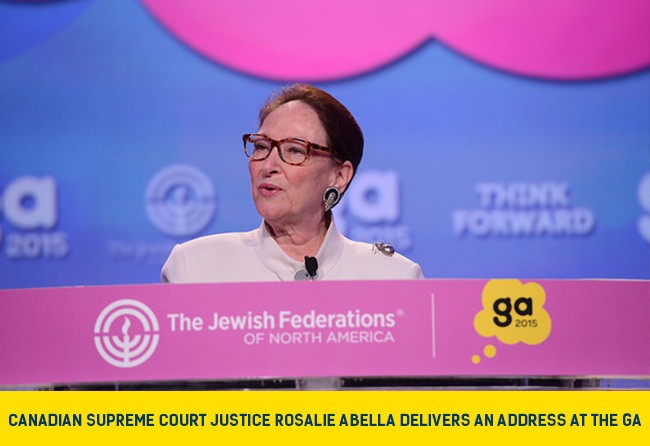 The theme Think Forward shaped the agenda as the sessions focused on thinking about our Jewish future be it Jewish education, Jewish philanthropy, BDS on campus, or Federation itself.  While there was opportunity to celebrate past achievements, there was a distinctive focus on moving forward in innovative ways to ensure the future of the Federation movement.

I have come away from my GA experience inspired, motivated and hopeful.

I was inspired by some incredible people who told their personal stories such as Canadian Supreme Court Justice Rosalie Abella who spoke about her Holocaust survivor parents and their influence on her to seek justice in the world.  I was inspired by actress Debra Messing who explained that she had to basically check her Jewish identity at the door as she built up her career in Hollywood but now that she has “made it” - she has once again asserted her Jewishness.  I was also inspired by the many participants of Federation programs such as Birthright alumni, PJ library parents and Hillel students who told fascinating stories of their Jewish journeys.

I feel motivated to innovate and introduce new ideas that I was introduced to at what is called FEDovation sessions.  There is an abundance of new, creative ideas emanating from Jewish Federations across North America.  We need to learn from each other and that is exactly what the GA provides: Opportunities to network, learn and meet other committed Jews who care about the future of the Jewish people.  There was even a cool App developed by JFNA for the GA.

Reflecting upon the GA, which attracted over 800 young adults and students, I feel hopeful for the future of the Federation system. Many participated as presenters at plenaries and breakout sessions.  Contrary to popular belief, Federations are not dying and there is a strong mission for Federations to carry out.  Is everything perfect?  Far from it.  Many discussions were held about the philanthropic desires of Millennials and other younger Jews who do not believe in large organizations that are multi-faceted.  The Federations’ shrinking donor base is a significant concern despite the larger amounts of money that are being raised albeit from less people.  Despite these challenges, and more, I believe that there is a strong future for Federations and the ideal of supporting a central communal institution.

The GA was highlighted by an address from Israeli Prime Minister Benjamin Netanyahu who promised to maintain funding for Israel experiences for Diaspora young adults such as Birthright Israel, MASA programs and Onward Israel.  He also announced that he had created a new roundtable, chaired by the Cabinet Secretary, with the Conservative, Orthodox and Reform movements in Israel.  He emphasized that it is the first time a government of Israel has created an official mechanism to work with the religious movements.  While he was “preaching to the choir”, he seems to understand that the future of the Jewish people is a burden that is to be shared by the State of Israel and Diaspora Jewry.

There was a distinctive Canadian flavor to this year’s GA, including Toronto’s largest contingent in many years. The opening plenary featured an impassioned speech by Rosalie Abella, while former MP Irwin Cotler shared the stage on a panel with Ambassador Dennis Ross and journalist Janine Zacharia in discussion with Times of Israel editor David Horovitz on the current state of global Jewry.  The Canadian contribution ended with the closing plenary at which former Minister of Foreign Affairs John Baird addressed the plenum.

While this year’s GA was an unforgettable experience, I have no doubt that next year’s event, also to be held in Washington, will be just as inspiring, entertaining and informative. If you have the opportunity, I highly recommend that you join us as part of Toronto’s contingent in 2016.