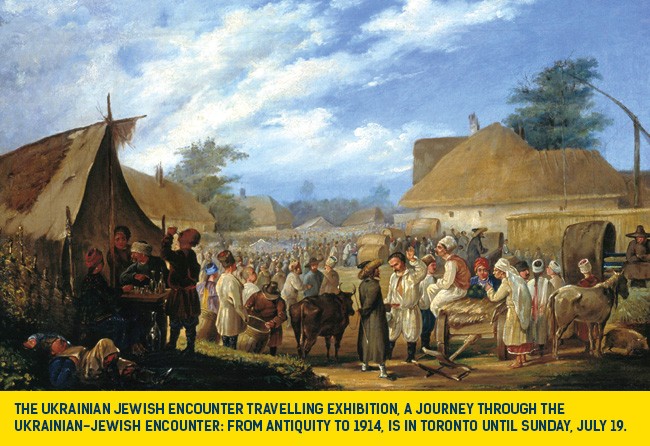 The Ukrainian Jewish Encounter (UJE) travelling exhibition, “A Journey through the Ukrainian-Jewish Encounter: from Antiquity to 1914”, had its Toronto opening in conjunction with the Ukrainian Museum of Canadian History on Wednesday, July 8, 2015. It will be shown until Sunday, July 19, 2015 at St. Vladimir Institute, 620 Spadina Avenue. Exhibition hours are 10:00 am – 5:00 pm daily.

The territory of modern-day Ukraine has been the homeland of diverse and flourishing cultures, including one of the most populous Jewish communities in Europe, whose presence on Ukrainian lands dates from 2,000 years ago. The vast majority of Ashkenazi Jews today have their origins in Ukrainian lands

Created by UJE and co-funded by Citizenship and Immigration Canada, this multi-media exhibition consists of narrative, images, music, and continuously running videos. It offers an integrated account of the historical experience of Ukrainians and Jews, in all its complexities—under ever-changing political regimes, as two stateless peoples, side by side, over long periods of normal co-existence conducive to the creation of enduring cultures and cross-cultural influences, and during intermittent episodes of crisis and violence. The blended Ukrainian-Jewish story, up to the end of tsarist Russian rule and Habsburg Austro-Hungary, will be of particular interest for both Ukrainian and Jewish audiences, but also for a wider Canadian public, offering diverse perspectives on a shared history

The Ukrainian Jewish Encounter (UJE) is a privately organized multinational initiative launched in 2008 by a group of individuals from Canada, the United States, Ukraine, and Israel. Its work engages scholars, civic leaders, artists, governments and the broader public in an effort to promote deeper mutual comprehension and solidarity between the two peoples.

After its Toronto run, the exhibit will travel to Edmonton and Montreal in August-September.