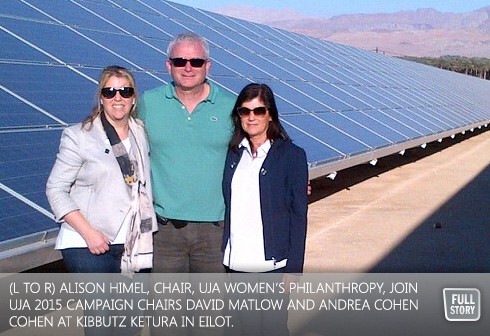 How far your UJA Dollars are felt

We heard that the weather at home was in the minuses again, yet we were very comfortable standing in the desert on February 26.   Before us were rows and rows of solar panels in an area perhaps the size of two football fields.   We were at Kibbutz Ketura, which is in Eilot, a region that comprises 13% of the land mass of Israel yet has only 4,200 residents.  Eilot sits just north of our Partnership City of Eilat.

According to Udi Gat, the elected regional head of Eilot, the people of Toronto are responsible for the social and technical miracle we were seeing.  About ten years ago, UJA Federation of Toronto initiated a study to consider how to help the people of Eilat and its northern region Eilot (picture a study for the GTA including Toronto, Markham and Vaughan).  The issue being addressed at the time was the lack of high quality employment opportunities, which results in a transitory, demoralized and uneducated population with a lack of social cohesion.

The study identified solar energy as an opportunity area for the region.  The sun beating down on our heads during our visit makes this an obvious idea.  But ten years ago, nobody in Israel knew how to go about doing it so UJA funded a conference to bring to the region experts in the field to kickstart a plan. That conference, coupled with the regional infrastructure our UJA dollars funded, inspired a group at Kibbutz Ketura to go out and raise a $4 million start up round of financing to help build Israel’s first solar plant.  It took a while for  the necessary regulatory changes to be made, but the first solar field was built and four more in the region are in process. Together they can supply 70% of Eilat’s daytime electrical needs, which is a significant amount. When another few fields which are in the works come on stream, there will be a clean energy surplus that can augment the national power grid and send electricity north.

Eilot has undergone a transformational change. The region is now a world center for solar power innovation, bringing in 2000 international delegates to the bi-annual conferences that it convenes.  Citizens of Eilot travel internationally including to Arab states to explain how all this has been accomplished.  A world scale development site for alternative energies is being built which will serve as a magnet for world caliber research and inventiveness. Patents developed in Israel are being utilized in the solar fields which has given rise to a series of start ups in the solar services area.  High quality employment opportunities are available. Truly, our UJA planners and dollars were the catalyst and seed money that brought technology, high quality jobs and clean energy into Israel’s south.

Like we say on Pesach, if UJA was responsible for only that, it would be enough, Dayenu. But it gets even better.

The group that developed the solar fields at Kibbutz Ketura had a vision that Israeli technology and know how in the field of solar power should help the poorest people in the world. They chose to do so first in Rwanda, to help that country recover from the genocide of the Rwandan people. Rwanda is a country that supplies its energy  mostly from burning diesel oil, which pollutes and isn’t sufficient to service the entire population. Without electricity it is not possible to use the internet, have refrigeration, operate manufacturing facilities or benefit from everything we take for granted in our lives that electrical power allows.  The lack of electricity holds people back from improving their conditions  The new solar plant will be a clean energy source supplying 8% of Rwanda’s needs.  UJA dollars are not being invested in Rwanda, but the learning and practical experience gained in Israel which were inspired and financed by UJA funds raised in Toronto is being exported to there.

Simply bringing electricity to Rwanda would have been sufficient, Dayenu, but the Israeli solar group that emerged from Ketura decided to put the new solar plant in the fields at Agahozo-Shalom Youth Village.  This is a Rwandan orphanage modeled on the Youth Aliyah villages established after the Holocaust for the orphaned Jews of Europe.  The goal of this Rwandan orphanage, which was founded by the late Anne Heyman, is to give children who are orphans due to the Rwandan genocide a chance at an education, and at life.  The solar plant had its financial closing on February 17 and is the first utility-scale solar field ever built in East Africa.  The electricity sold from the solar plant will be a source of  perpetual income to the orphanage, ensuring the Village’s  financial viability forever and assuring the ongoing improvement of the lives of the citizens of Rwanda.

Udi Gat, Eilot’s regional head, told us that even more than the money, UJA Toronto’s greatest contribution was to inspire him, and the people of his region, to THINK BIG.  We helped him figure out what will really transform a community and ensure a better future. UJA funded the BIG THINKING and helped with the development and implementation of the BIG IDEA.  We saw and can confirm to you that the BIG IDEA is even more than BIG. It is HUGE.

Udi became very emotional when sharing with us his appreciation for what Toronto’s UJA has done for the people of his region.  He asked us to convey his appreciation to all of the people of Toronto who support UJA which is why we have written this report of our visit.  The improvement in people’s lives that we are able to make together, which we saw while we were in Israel, both inspired and moved us.  We return truly energized and motivated as your Campaign co-chairs to continue this important work.

As a result of the catalytic role played by Toronto’s UJA, when a light is turned on in Israel, and soon when a Rwandan child is reading a book at night, we had a hand in it.  We should all be very proud of this.  UJA dollars are really fixing the world.