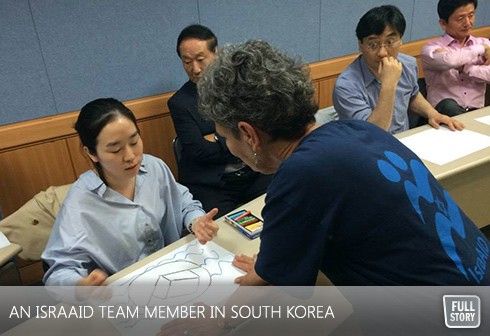 Less than 12 hours later, what was supposed to have been a dream day for the youngsters turned into a nightmare of unprecedented scope, as the ferry capsized off the southwestern island of Jindo, sending more than 300 teenagers to their deaths.

In the wake of the tragic news, IsraAID, a partner organization of UJA Federation of Greater Toronto, did what they do best; they came up with a strategic plan to assist the affected community and immediately sent a team of professionals to help on the ground and to “train the trainers”.

During the past few weeks, members of IsraAID have been conducting intensive trauma care seminars to over 230 Korean social workers, community counselors, psychologists and psychiatrists who are a part of the national and regional government task force which addresses the emotional needs of the community in both the disaster area in Jindo Island and the community in Ansan city.

Looking to the future, IsraAID is also developing an intervention work plan for the next two years so to properly provide professionalized tools to our government and non government partners. The trickle affect would initially focus on the families but would expand to help the community surrounding the families and eventually would reach tens of thousands of people across Korea through IsraAID's TOT (Training of Trainers’ model).

“With a tragedy such as the MV Sewol, the psychological effects are multi-layered, as the survivors try to rebuild lives that have been irrevocably shattered,” said Shachar Zahavi, Founding Director, IsraAID. “Doctors who have been treating the teenage survivors say that 20 percent of them have experienced signs of post-traumatic stress disorder, as well as sever ‘survivor’s guilt’, and could require long-term counseling and psychiatric help. This situation requires far more than merely a band-aid solution, which is why IsraAId is intervening over the next two years, to ensure that Korean professionals have all the tools necessary to assist these youngsters rebuild their lives and peace of mind.”

“UJA Federation is proud to have been one of the founding supporters of IsraAid,” said Ted Sokolsky, President & CEO, UJA Federation of Greater Toronto. “We have partnered with them in support of their efforts to be the face of the Israeli people in disaster relief around the world.  Israelis have learned to turn aside tragedy and work for the good of all mankind. That's why it's particular gratifying for UJA Federation and our supporters in this great Jewish community to see IsraAid put those lessons to work for the people of Korea.”