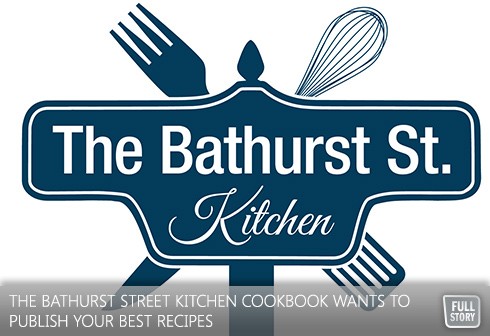 United Jewish Appeal of Greater Toronto Women’s Philanthropy Division is currently collecting favourite, tried and true recipes from cooks across the GTA for inclusion in The Bathurst Street Kitchen; a community cookbook of go-to recipes scheduled for release early next year.

The cookbook will reflect the diversity of Toronto’s Jewish community with recipes handed down through generations from across the globe, as well as new modern day recipes.

The Cookbook will not only collect the community’s recipes for Jewish holidays, it will also include favourite recipes of any type, old and new, healthy and not so healthy; its best go-to recipes for appetizers, soups, salads, sauces, sides, mains and desserts. The Bathurst Street Kitchen will be a culinary legacy by and for Toronto’s Jewish Community.  Executive Committee members/Chairs Elisa Morton Palter, Karine Krieger, Brenlee Gales, Lissie Sanders and Naomi Oelbaum have gathered a group of incredible volunteers.

“As a community defined by its love for food, we want to share Toronto’s favourite, go-to recipes and at the same time educate the community about the many services offered by UJA and its agencies,” says Krieger. “This will be a cookbook and resource that is used for cooking, and not just for looking,” adds Palter. “The best cookbooks are the really stained ones because those are the ones that have been used and loved the most,” agree Sanders and Oelbaum. “We predict this will be your messiest cookbook yet,” they joke.

The more people contribute, the more successful the cookbook will be. Home cooks and professional chefs, young and old, male and female, are encouraged to visithttp://www.jewishtoronto.com/Recipe.aspx before April 1st, 2014 to submit their favourite recipes and pre-order their copies.