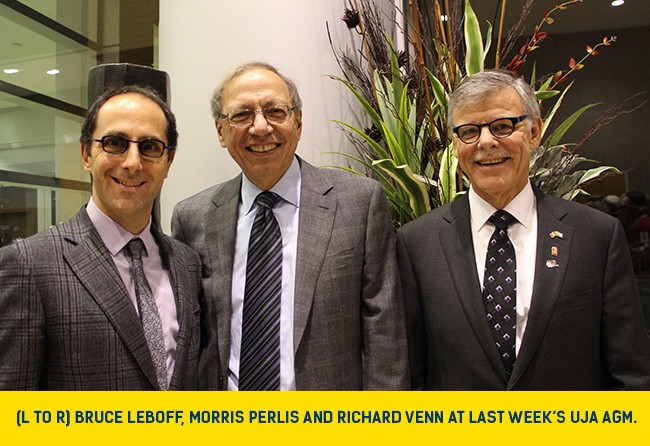 By Daniel Horowitz--It’s been said that change is good.

And last week, The Lipa Green Centre on Sherman Campus was abuzz with changes aplenty as UJA Federation held its Annual General Meeting, celebrating the successes – and contemplating the challenges – of 2013/2014.

Morris Zbar, President & CEO of UJA Federation, began his address, by extending a yasher koach to the Chairs of UJA’s Campaign 2014 - Stephen Diamond, Lisa Draper, and Lori Rosenthal, which raised $61 million. He also spoke briefly of other important milestones,  including UJA Federation’s ongoing support of Jewish education, what Zbar called “the backbone of a successful and proud Jewish life,” by providing $10 million in tuition subsidies.

He also mentioned last year’s Walk with Israel, which attracted a record crowd of 17,000 walkers last May.

Richard Venn, who completed his two-year term as UJA Federation’s Board Chair spoke of a number of highlights from his tenure, including the organization’s ongoing outreach to Toronto’s Israeli and Russian communities, the success of the Schwartz/Reisman Centre on Lebovic Campus in Vaughan, and the fact that the Jewish Foundation of Greater Toronto, UJA Federation’s planned giving and endowment arm, experienced an impressive 17 percent rate of return over the last fiscal year.

But it was UJA’s commitment to Israel that Venn was most passionate about.

“This past summer, we witnessed an onslaught from Gaza that saw countless mortars and missiles fired at the people of Israel’s south for close to two months. UJA, in response to a request from the Government of Israel, immediately established an Israel Emergency Campaign to send money to assist Israelis living in the line of fire and within weeks, more than $5 million was raised. Once again, UJA, along with the people of Jewish Toronto, did what it has always done whenever Israel was in need, and that is open our wallets, and our hearts, for the people of the Jewish state.”

With Morris Perlis taking the reins from Richard Venn as the new Chair of the Board, Bruce Leboff, a past UJA Campaign Chair, and a past Chair of UJA’s Walk with Israel with wife Lianne, becomes the new Vice-Chair of the UJA Federation Board.

Perlis succinctly explained why he took on this latest responsibility.

“The work done by UJA Federation is absolutely vital; vital for one simple reason. I was taught from an early age and have passed on to my children that as Jews, we have a responsibility to take care of our fellow Jews, and that is what Jewish people do!”

For a complete look at UJA Federation’s activities for 2013/2014, including financial results, visit UJAfederation.report.