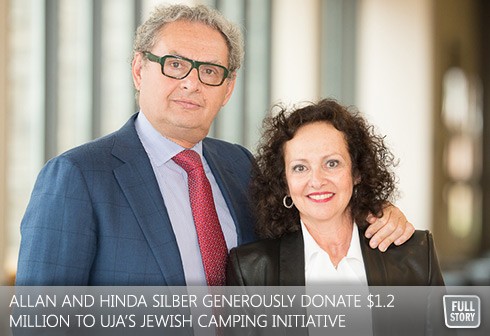 By Daniel Koren-- Now, it’s even easier to send your kids to camp.

Thanks to Toronto community leader and philanthropist Allan Silber and his family, who recently made a generous gift of $1.2 million to UJA Federation of Greater Toronto’s Jewish Camping initiative, the newly established Silber Family Centre for Jewish Camping will usher in a new era for Jewish overnight camps.

The Centre will be investing in innovative programs and services that will increase the number of Jewish campers in the Greater Toronto Area.  The Silber Family gift and the creation of the Centre has already made a significant impact on Jewish camping with the expansion of Toronto’s groundbreaking campership incentive program, TopBunk, to include day school students and three additional camps.

Over the past five years, TopBunk has brought over 1600 campers to overnight camps by offering a grant to families of first-time campers.  Now, the Silber Family Centre is looking to reach over 500 new campers a year.  This year, The Centre, in conjunction with the Foundation for Jewish Camps, is launching a multiyear Institutional strengthening program for the Ontario Jewish camps, bringing cutting-edge knowledge and professional development to our local camps.

“Our camps, while diverse, all offer tremendous experiences, where the kids have a wonderful time and engage in outdoor sports, swimming, hiking, and more. What separates us from other camps is that we do it with a Jewish atmosphere, with a Jewish peer group where we nurture Jewish values,” said Bryan Keshen, UJA’s Vice President of Emerging Communities and Jewish Camping.

“Every camper benefits from having such a profound Jewish experience so early in their lives.”

First-time campers whose families have utilized the TopBunk incentive grant have spoken highly of being in a fun, learning environment that teaches them the importance of Jewish values like community and tzedakah.

“The Jewish camp experience has given me a lot of good friends and a lot of new Jewish values that will stay with me forever,” said one enlightened camper, 18-year-old Raffi Massil. “If it wasn’t for camp, I wouldn’t be connected to Jewish life.”

As many of the camps host young Israeli emissaries and students, the experience also gives Canadian youth the chance to meet Israelis their own age, fostering a deep and lasting relationship between them and the people of Israel.  And it’s not just Canadians who understand the value of Jewish camp. TopBunk is the Canadian equivalent of an American program, One Happy Camper, which is also supported through the Foundation for Jewish Camps. The Foundation has confirmed its plan to merge the two programs, to be known as One Happy Camper, later this year.