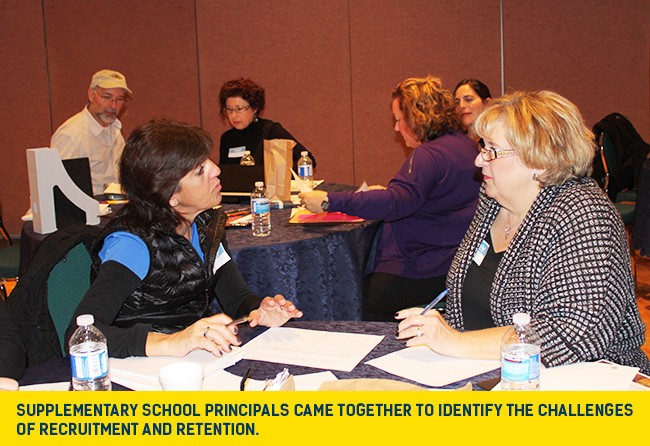 When we think of supplementary schools, too many of us recall images from the Cohen Brother’s movie, “A Serious Man”, with rabbis pacing up and down the aisles, grabbing students by the ear and reciting Torah from rote.

Today’s supplementary schools are a different beast and UJA Federation’s Julia and Henry Koschitzky Centre for Jewish Education has identified supplementary education as a vital priority for increasing engagement in Jewish education.

Historically, UJA Federation afforded grants to schools improve the quality of supplementary school for specific program models.  During the 2014-2105 academic year, the Koschitzky Centre is focusing on recruitment and retention in order to support the goals of building capacity in the field, while supporting access to Jewish education.

In mid-October principals attended two sessions identifying the challenges facing them in dealing with recruitment and retention. Lay leaders of the schools joined the principals at the second session.

The two sessions served as a kick-off to a year-long endeavor spearheaded by UJA’s Julia and Henry Koschitzky Centre for Jewish Education that includes bringing the principals together to form a community of practice to share and learn with each other, as well as individual consulting for each school’s specific challenges.  The principals and lay leaders were introduced to a tool from outside of the Jewish educational world known as “Design Thinking”.  Design thinking starts with empathy with one’s users, in this case parents and children in the school, and trying to gain a deep understanding of their motivations and needs while using that as a starting point to develop new ideas to attract and retain students and families.