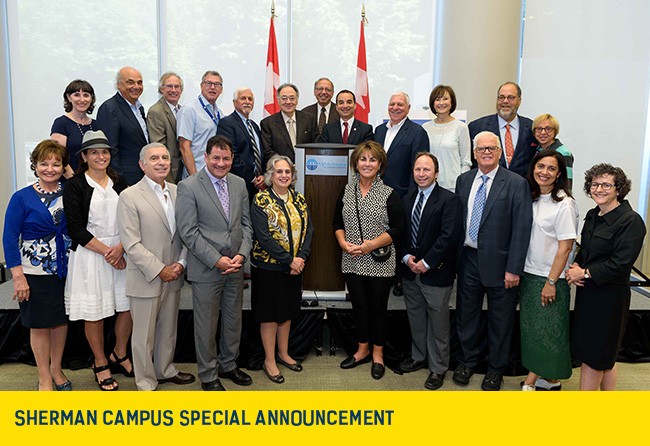 The Government of Canada is providing up to $10.2 million in funding for the second phase of the Sherman Campus project in Toronto, which will bring a new recreational and community programming facility to residents of one of the city’s most vibrant districts.

Michael Levitt, Member of Parliament for York Centre, on behalf of the Honourable Amarjeet Sohi, Minister of Infrastructure and Communities, and Morris Perlis, Board Chair of the United Jewish Appeal Federation (UJA), made the announcement today at the Sherman Campus in North York. James Pasternak, City Councillor for York Centre, was also in attendance.

“Public infrastructure connects people, supports job creation, and boosts economic development. This is why the Government of Canada is providing unprecedented funding for infrastructure projects that will help grow the middle class and promote sustainable development and long-term prosperity in communities across the country. By financing projects like the new Sherman Campus, we will build the Canada of the 21st century and ensure a high quality of life for generations to come.”

Michael Levitt, Member of Parliament for York Centre, on behalf of the Honourable Amarjeet Sohi, Minister of Infrastructure and Communities

The new complex is part of a broader initiative to expand and renew UJA’s community facilities across the Greater Toronto Area. It will be equipped with fitness facilities, meeting rooms, seminar areas and teaching spaces. Other features of the project include indoor and outdoor aquatic centres, outdoor sports courts, and nature and fitness trails.

Once complete, this project will help meet the increasing needs of one of Toronto's fastest growing communities by offering a range of programs covering health and wellness, arts and culture, early childhood education and much more.

“This is indeed an exciting time for our entire community. On behalf of UJA Federation of Greater Toronto, we thank the Government of Canada for providing this new funding that will provide matching funds towards the construction of Sherman Campus Phase 2. This brings us closer to reaching our fundraising goal, which we are confident will be reached in the next few months. The Sherman Campus will embrace and promote the shared Canadian values that we all hold dear and the support for this project by the federal government is a testament to its importance.”

Morris Perlis, Board Chair of the UJA Federation

Federal funding for Phase 2 of the Sherman Campus is being provided through the Major Infrastructure Component of the Building Canada Fund and represents approximately 15% of the total project costs.

The Sherman Campus Campaign has had tremendous success since the UJA Board of Directors gave approval to proceed with the plans for Phase 2 in March of 2015.  Including the funding from the Government of Canada, over $40 million has been raised under the leadership of Fred Waks and the Sherman Campus Leadership Committee, with just under $10 million to go to complete the fundraising necessary for the project.  The Government of Canada funding is contingent on 100% of the fundraising being finalized by UJA Federation’s Tomorrow Campaign over the next few months.

Formal application for Site Plan Approval has been made to the City of Toronto and UJA is planning to begin construction on Sherman Campus Phase 2 in the Fall of 2017 with an expected construction completion date of late 2019.

Watch a recording of the announcement here.