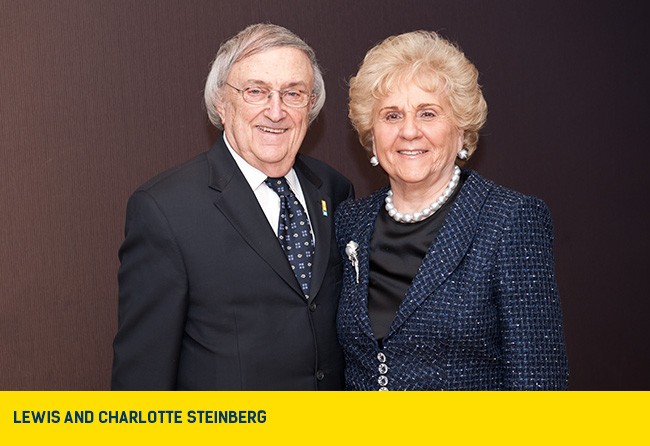 By Daniel Horowitz--Although she was not yet a teenager at the time, Toronto’s Charlotte Steinberg, 81, who along with husband Lewis, 84, are among Toronto’s most generous and visionary philanthropists, remembers an event that started her on her path towards a life committed to helping others.

“I remember when I was quite young, there was a Jewish couple with a young child who lived not far from us in Brockville, Ontario,” says Charlotte. “Somehow my parents learned that the husband was beating his wife, and they knew something had to be done about it. Before long, that same poor woman and her child were taken in by my parents, and lived with us for some time. That was when I first learned that it was important to help those less fortunate than ourselves. It was a lesson I never forgot.”

Fast forward to ten years ago.  Charlotte and Lewis had been significant UJA donors for decades and yet wanted to do even more.  Focusing on her passion to help abused women, Charlotte called UJA asking if there was a waiting list for the UJA funded Jewish Family & Child’s (JF&CS) Women Abuse program. Upon learning that there was, Charlotte immediately funded a new social worker to eliminate the wait for women dealing with this terrible trauma.
Seven years later, Charlotte made the same call to UJA and asked if another wait list had accumulated. Upon hearing of the increase in demand for this vital program, she paid for a second social worker, and continues to fund both.

“I suppose I have always had a special place in my heart for people who are vulnerable; especially women and children who are the victims of domestic violence,” says Charlotte. “My parents were wonderful people, and taught me an important lesson about compassion and doing the right thing when they took in that woman and her child all those years ago.”

Another parallel experience in their youth also had a compelling impact on both Charlotte’s and Lewis’ future philanthropic endeavours when, without knowing each other, the pair worked as counselors at two separate Quebec summer camps for underprivileged children.

“You should have seen these kids who came to that camp,” says Charlotte, shaking her head at the memory of her time as a 17-year-old counselor at Camp Sunshine. “Many of them had been beaten. They were dirty; many had lice, and most of them had so little clothing.  It was terrible and so sad to see. I remember calling my father right away and told him that he’d better come soon and bring plenty of clothing and other treats for these kids.”

Lewis, who was working as a counselor at Camp B’nai Brith just 25 miles away, learned the value of fundraising and tzedakah after a visit by his father that summer.

“My father came to the camp one weekend and saw me lugging this enormous chunk of ice,” recalls Lewis. “I told him the camp didn’t have refrigeration, and that this is what we had to do to keep the food and milk fresh for the kids. He looked at me and promised, ‘this camp will have a refrigerator within two weeks.’”

Sure enough, after finding out that a new walk-in fridge would cost a thousand dollars – a lot of money back then – his dad called nine friends and asked each for a hundred dollars. They all contributed and the new refrigerated unit was delivered soon after.

The philanthropic lessons passed on to Lewis and Charlotte by their parents’ words and actions continue to be passed on to their three daughters, husbands, and six grandchildren, all of whom understand the importance of sharing these values with future generations. Lewis and Charlotte have, as their parents had done before them, reinforced the fact that it is their responsibility to give to those less fortunate than themselves.  In fact, their children must each write a cheque to the Steinbergs’ Family Foundation every year and they are all included in discussions of annual donations.

“Charlotte feels strongly about helping women and kids,” says Lewis, who along with Charlotte also supports UJA, North York General Hospital, Baycrest and numerous other organizations. “Since I’ve known her, she has always been an incredibly compassionate person.  And although she is so deserving of praise for her generosity, she doesn’t like the spotlight. In fact, the only reason she’s being interviewed for this story is because she hopes it will inspire others.”

“I can sleep well at night because I know that we are helping people,” says Charlotte who, at the tender age of 18, worked as an X-ray technician at Montreal’s Jewish General Hospital after moving on her own to that city from Brockville.  “Thank God we are in a position to do so. I believe it’s our responsibility to help those less fortunate and if you can help, you need to.”