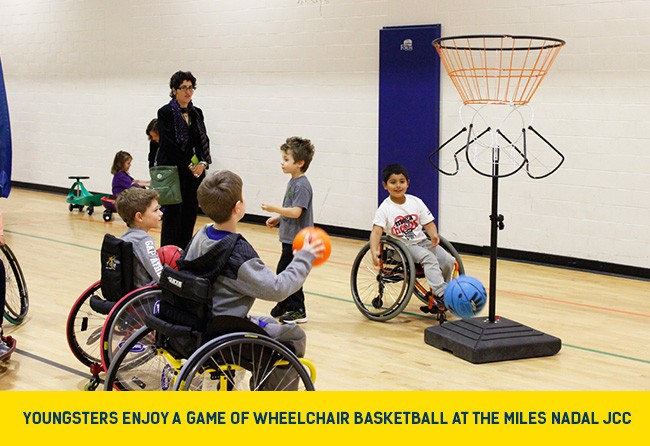 The Jewish Community Centre Association of North America (JCCA) has named Toronto’s Miles Nadal JCC the recipient of three Biennial Excellence Awards which will be handed out in May at an awards ceremony held in Baltimore.

The Miles Nadal JCC – a beneficiary agency of UJA Federation - was named as the recipient of the Zahav Award for Access and Inclusion; the Kol Ha Kavod Award for its Hebrew Institute, and an Honorable Mention for its Indoor Jungle Gym.

“The Miles Nadal JCC is so proud to receive this year’s awards from the North American Jewish Community,” says Ellen Cole, Executive Director. “At the Miles Nadal JCC, Sandy Keshen’s dream for inclusive programming has become a reality, a reality acknowledged by the Zahav Award. It began with the Itanu initiative ten years ago and now we have Personal Training for special needs; we have swim instruction for the visually impaired; Adapted Sportball and Accessible Yoga; MegaHoops; WheelDance and an Inclusive Latin and Ballroom Dance workshop. And in May we will launch the first ReelAbilities Film festival ever held outside the United States.  Through our partnerships with external agencies and our community advisory committees we are truly open to all.”

The Miles Nadal’s Hebrew Institute, which received the Kol Ha Kavod Award, welcomes learners at all levels, and is more than just a series of Hebrew Classes. The Hebrew Institute provides progressive learning and is a gateway to Hebrew language and Israeli culture which includes arts event, lectures and parties to enrich the Hebrew studies throughout the year.

The Indoor Jungle Gym, which received an Honorable Mention, is a terrific alternative for interactive play.

The Miles Nadal JCC – the former Bloor Y – which reopened in 2004 thanks to UJA Federation’s Tomorrow Campaign – is located at 750 Spadina Ave, at the corner of Bloor and Spadina in the heart of Toronto’s Annex community.