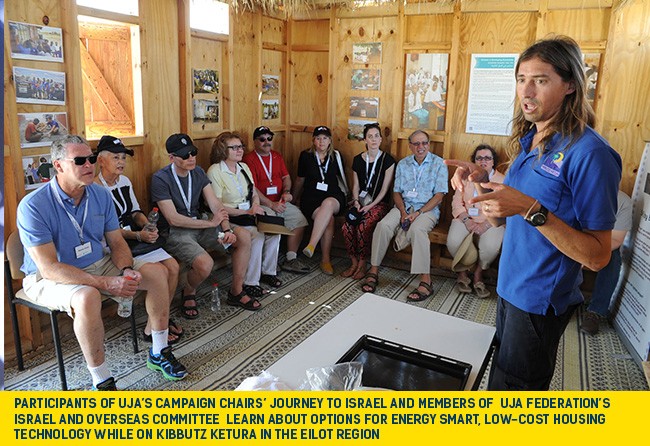 The mission was the brainchild of the chairs of this year’s annual UJA Campaign, Felicia Posluns and Shoel Silver and UJA’s Women’s Philanthropy Chair, Ruth Ekstein, all of whom had a new vision for the campaign chairs’ annual fact-finding mission to Israel.

“We wanted to give participants a real insight into the important work that UJA Federation does in Israel, and to experience the programs that we fund and to meet the people involved,” said Silver.

In Eilat/Eilot, the Chairs’ Journey group traveled together with UJA’s Israel and Overseas Committee, which is tasked with planning, approving and evaluating UJA’s charitable strategies and initiatives in Israel.

In Eilat, the mission toured a number of capital projects which were constructed with the support of UJA Toronto.  These included the Newton Glassman Emergency Medicine Unit at Yoseftal Hospital, the Brian and Avrona Shachter Family Dormitory Building on the Eilat campus of Ben Gurion University, and the Arava Science Center, which conducts research and development with a special emphasis on renewable energy.

“More importantly, we met the people behind UJA’s programs in Eilat and Eilot,” said Posluns.  “We heard from a nurse at Yoseftal hospital who had treated the victims of a recent terror attack near Eilat at the same time that her soldier son was involved in pursuing the terrorists.  We met with college students who have moved to Eilat to study and are volunteering in local schools.  And we were so impressed by the passion of high school pupils who, thanks to a new UJA-sponsored initiative, are experiencing the excitement of scientific discovery.”

Those on the Chairs’ Journey also met with pupils involved in the FIRST international robotics competition.  Against all odds, the Eilat team has won the Israeli championship twice and received an award in the world championships that were held recently in the United States.

Due to the generosity of United Jewish Appeal donors in Toronto, with the creativity and oversight of UJA Federation’s Israel and Overseas Committee, Eilat/Eilot has seen a transformation in education, higher education, medical care, and economic opportunity derived from creating an educational infrastructure for renewable energy in the region.

“This visit was much more than just a trip,” agrees Ruth Eckstein, UJA’s Women’s Philanthropy Chair. “It was truly a journey.  We saw with our own eyes how we are giving the next generation the tools to ensure the region’s strength and security.”

“The mission gave participants a real understanding of the partnership’s contribution to the development of the region,” said Debbie Kimel, co-chair of UJA Federation’s Israel and Overseas Committee, along with Honey Sherman. At the same time, it was an opportunity for the people of Eilat and Eilot to demonstrate what they have been able to achieve thanks to the support and encouragement of Toronto’s UJA Federation.”