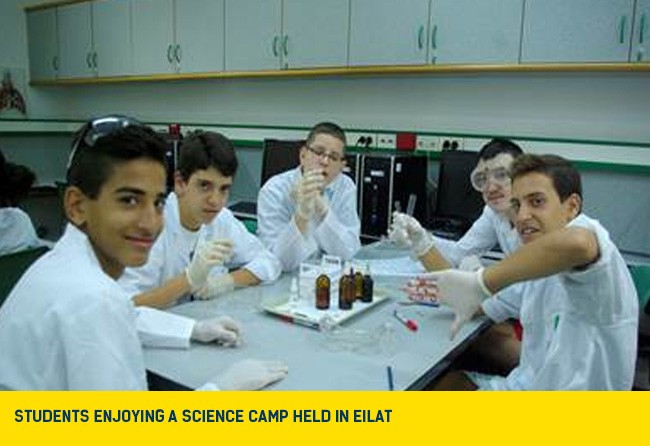 By Richard Summers--Over the past three years, UJA Federation of Greater Toronto, under the guidance of former President & CEO Morris Zbar and the organization’s new President & CEO Adam Minsky, has been changing the face of inter-agency collaboration in the field of Science and Technology education in Israel; reinvigorating the Science and Technology Education infrastructure in Israel, possibly the biggest challenge facing the future security state of Israel. It is truly the difference between Israel’s current status as a start up nation, to a country that will struggle to ensure that it can secure the necessary human resources for economic and social stability in the future.

It was clear to UJA Federation from the early stages of investigation into this issue that no one agency was able to provide a solution to this nationwide problem.  So, UJA Federation, which for many years has worked in strategic partnerships using models of collective impact, offered an opportunity to bring its expertise to create a significant change for Israel.

“The truly remarkable part of this process however is not that we have been able to bring government, private industry, academia and grass roots educators to work together in a common goal, but rather that within a period of less than two years we are already witnessing the effects this intervention is having on people’s lives,” says Honey Sherman, Co- Chair of UJA Federation’s Israel and overseas committee. “We our privileged to be playing an active role in changing a whole generation’s future, opening opportunities and creating hope for sectors of the community that have been forgotten in Israel’s start-up nation.”

To really understand this impact the best way is to share a simple of story of single pupil from Rabin High school in Eilat.

Three years ago, UJA Federation began its stem initiative in Eilat and Eilot.  The reality in schools prior to this initiative for pupils who wanted to study science was grim. Classes were over- crowded with in excess of 40 pupils crammed into classrooms designed to hold only 35, and this was not due to a lack of space, but because there simply weren’t enough teachers. Pupils had no opportunities to present research papers or to carry out advanced experiments as kids do in Tel Aviv, Jerusalem or Haifa. In Eilat/Eilot, schools lacked the necessary scientific equipment or the connections in academia to find the researchers who could work as personal tutors.

The reality was that a glass ceiling existed; the country had created an impenetrable wall for high schools graduates in the periphery of Israel to make their contribution in the world of science and technology and possibly making it impossible for these youngsters to even be considered to serve in an Elite intelligence unit in the army.

In 2012, Ron – a bright a popular kid whose only unusual trait was that he had a passion for physics and math - was starting high school. He played basketball, hung out with friends and generally got good grades at school. In the 10th grade he joined 45 other kids from all of the schools in Eilat to study physics. He understood that the chances of him finishing the course were small as the dropout rate from this city program was staggering. He also knew that he wouldn’t have the opportunity to learn applied physics.

Fortunately for Ron, UJA Federation, together with Bet Yatziv, had just started a pilot program that included bringing university students into the classroom so that pupils could work in small groups, ensuring that pupils didn’t get lost in complex concepts. Ron thrived in this environment and wanted more. He wanted his chance to apply this newly found knowledge, and fortunately for him, Bet Yatziv developed connections with the science department of Ben Gurion University. For the first time, Eilat students had the opportunity to participate in academic research and to write their own academic papers and Ron was one 44 pupils in the fields of physics, chemistry and Biology who took advantage of this opportunity. That same year, Ron was chosen to go CERN to participate in a delegation to learn about the particle accelerator that is one of the world’s most cutting edge physics research facilities.

The impact however is not just about academic achievement, the impact is that Ron and hundreds of other kids in the periphery are no longer invisible.

Today, Ron is serving in 8200, the IDF’s most Elite intelligence unit and one of Israel’s most important incubators for tomorrow’s leaders and innovators. In the coming year, UJA Federation will transform the lives of countless youngsters - from preschool to high school - ensuring those who were once invisible are given access to cyber, science, technology and engineering.