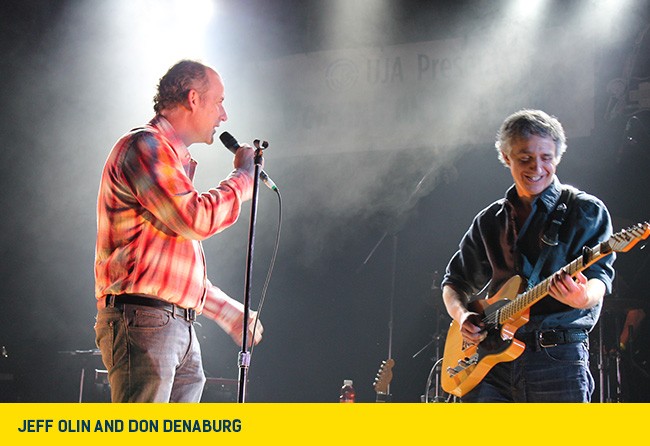 UJA’s Working on a Dream concert party - featuring Don Denaburg and The River Street Band – took to the stage at Toronto’s Opera House on Saturday night, and whether they were fans of “The Boss”, or merely there to have a good time with friends, the crowd of more than 300 had a rocking good time.

Jeff Olin, the chair of the event, introduced the Bruce Springsteen cover band by highlighting the two themes that intersected for the evening.

“The 2015 UJA Campaign was about the joy of giving to the annual Campaign, and the musical concert is an expression of that joy,” said Olin. “Working on a Dream reflects the work UJA does to relieve Jewish poverty in Toronto.  Raising enough money in the Campaign to help everyone who needs help is the dream.”

“Working on a Dream’ was a wonderful event,” said the man with the guitar, Don Denaburg. “UJA does so much for so many, and it was great to see everyone singing, dancing and having so much fun, while helping their Jewish brothers and sisters who are in need.  It was a real party - like a Rock ’n’ Roll Bar Mitzvah!  The band and I had a blast and were thrilled to be a part of it."

“Jewish poverty is an invisible problem in our community,” said Nancy Singer, the Director of Kehilla Residential Programme, a UJA Federation-beneficiary agency and the community’s agency to help provide affordable housing to the Jewish poor. “It is there but nobody sees it. There are 24,000 Jews in Toronto living below the poverty line.  Each one of them has a story.  The more money raised by UJA’s Annual Campaign, more of these people can be helped.”

Jesse Gold, an up-and- coming Toronto performer opened the show, followed by Denaburg and The River Street Band, and the band did not disappoint as they performed all of “the Boss’s” favourites, including Thunder Road, Tenth Avenue Freezeout, Cadillac Ranch and Born to Run. In his introduction to Promised Land, Denaburg asked the audience whether anyone in the crowd had ever been to the promised land.  Not surprisingly, many in the audience had.

David Matlow and Andrea Cohen are the co-chairs of the 2015 UJA Campaign.
“All year, we have been highlighting to the Jewish community the important, life-transforming work that UJA does each and every day,” said Matlow. “We have been finding different ways for our community to connect with UJA and feel proud of how their donations to the organization enable those less fortunate than us to find a way through their troubles.”

“The Working on a Dream concert party was our way to reach out to those who find meaning in Bruce Springsteen’s music,” said Cohen. “His songs deal with struggle, and many in our community are struggling.  One of the lines in the song “Working on a Dream” is “our love will chase trouble away”.  Every donation to UJA is a reflection of that love, and all the donations together do indeed chase troubles away."

Working on a Dream is one of the final events of the 2015 UJA Campaign.  It was a concert party to raise awareness of UJA’s initiatives to relieve Jewish poverty in Toronto.  The official closing of the Campaign will take place at the Carlu on February 2 and will feature the star of the Big Bang Theory and an outspoken supporter of Israel, actress Mayim Bialik.  Tickets are available here.