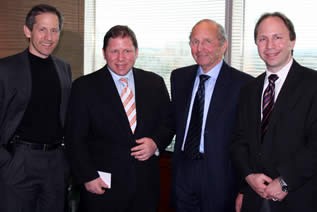 Speaking in front of his family, Ontario Attorney General Michael Bryant and UJA Federation leaders at a small, informal gathering last week, Martin Prosserman signed a cheque for $12 million saying: “I thank you all for letting me pay off this debt – a debt I incurred as a child in Montreal, and something I consider myself fortunate to be able to do.”

The cheque represents the lead gift towards the building of the new Prosserman JCC, which will replace the current, 45 year old Bathurst Jewish Community Centre on Bathurst Street, just north of Sheppard.

“Every community requires its key leaders to step forward and make a special contribution and truly perform a mitzvah, a mitzvah like the one Martin Prosserman and his family has performed today,” said Bryant. “As the husband of a Jewish Montreal ex-patriot, I’m thrilled that you’re in Toronto now and that you have given so much. Thanks for being such a wonderful neighbour.”

Prosserman – who grew up poor in Montreal - recalled how if it weren’t for the Montreal YMHA where, for a nickel, he would receive a clean towel, a bar of soap, and a hot shower, he might not be here today.

“I never really thought this was going to happen; we started talking about this five years ago, but, thanks to Carol Seidman (director of UJA Federation’s capital campaign) and UJA Federation President Ted Sokolsky, it’s really going to happen, and my family and I are so thrilled.”

Prosserman made his comments in the boardroom of a private investment firm started by the family after selling Moores the Suit People in 1996.

Construction on the new Central Square campus on which the Prosserman JCC will be a key component, is scheduled to begin next fall as part of UJA Federation’s $250 million Tomorrow Campaign.

Chaired by Lawrence Tanenbaum and Gerald Schwartz – the Tomorrow Campaign is creating three new campuses for Jewish life throughout the GTA - downtown, in Vaughan and at the Bathurst and Sheppard location.

“I knew during our first cup of coffee down the street at Bregman’s five years ago, that this day would come,” said Sokolsky. “I saw it in Martin’s eyes. He wanted to do something great, something that would make a major difference to this city, a city that has always welcomed wave upon wave of immigrants – just like Martin’s own Ukrainian parents. This new facility will serve the needs of young and old alike, for generations to come.”

"I remember talking about the concept of Central Campus with Martin and his boys five years ago," said Peter Cohen, chair, central square redevelopment committee. "It's really quite astounding how you can go from needing a JCC in Montreal in order to take a hot shower, to having your name on a brand new, state-of-the-art JCC here in Toronto. Thank you, Martin, for being such a fine example to our entire community."

Ron Prosserman, who stood with brothers Gary and Brian during the proceedings, spoke about the significance of the Prosserman JCC.

“It has extra special meaning to our family because it honours the memory of my mother who, like the building, was in a class of her own,” he said while fighting back tears. His mother Ellen passed away in 2002.

“My mother was always happy and loved by those who knew her. She treated everyone with dignity, compassion, honesty and respect. The elderly, poor, vulnerable and the general community will all be treated with this same kindness and care in this exciting new JCC.”

Also on hand for the historic cheque presentation was Leslie Gales, chair of the Tomorrow Campaign leadership committee.

"Martin told me that he wanted to see this project come to life while he was still here, to make sure it came to fruition," said Gales. "Well, Martin, it's really happening," she said with a smile.