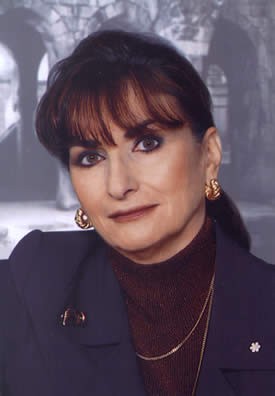 Community activism on behalf of Jews in need around the world is a defining trait of Jewish Toronto.  Wendy Eisen was at the forefront of the movement to free Soviet Jewry. Julia Koschitzky and Phil Granovsky assumed international leadership positions and Rabbi Gunther Plaut continues to advocate forcefully for understanding between Jews of diverse backgrounds and beliefs. Then there's Judy Feld Carr, the force for freedom on behalf of Syrian Jews.

It's hard to believe that this unassuming former music teacher and grandmother of 10 was responsible for the rescue of 3,228 Jews from Syria over 28 years, in a story of international intrigue that is the stuff of legends.
To the Jewish families she rescued, she is known only as Mrs. Judy, if they know her name at all. And it was only after she secretly smuggled her last Jewish family out of Syria (they arrived in New York less than an hour before two hijacked planes flew into the World Trade Centre) that this formidable woman's story became more clear.
Born in Montreal and raised in Sudbury, Feld Carr felt the sting of anti-Semitism from a young age.  "I grew up in a small town and was the only Jew in school. I was beaten up in grade two for killing Christ – they knocked out my front teeth."

It was through her Sudbury neighbour and Holocaust survivor, Sophie, that Feld Carr says she learned the horrific plight of the Jewish people. Sophie, whose two children were killed in Auschwitz and who was a victim of Dr. Joseph Mengele's horrifying experiments, inspired her.

"When I was 10 years old, Sophie told me, ‘you have to do something so that this never happens again to the Jewish people.' I never forgot it," said Feld Carr.  "Every time I thought about quitting, which was every second day, I'd always think of Sophie, and say, okay, I'm going back. I promised her, and I did it."
How did she enter the dangerous world of smuggling, bribery, escape routes and secret agents?

"God works in strange ways," says Feld Carr. "This isn't my background. I'm from Sudbury. How did I know how to do this? The whole thing is surreal." It all began in 1972, when Feld Carr and her first husband, Dr. Ronald Feld, learned about the plight of 12 young Jewish men who died trying to escape from Syria.

They decided, with some friends, to take up the cause of Syrian Jewry. Through a single phone call, "the one and only phone call that was ever made to Syria from a Jewish community," notes Feld Carr, she managed to connect with Rabbi Ibrahim Hamra, the Chief Rabbi of Syria in Damascus, and boxes of religious books began to flow from Toronto to Syria. They communicated through code in the addresses of telegrams.

Then in 1973, her husband died. Feld Carr decided to continue her work, helped by the Dr. Ronald Feld Fund for Jews in Arab Lands, set up by the board of governors of Beth Tzedec Congregation. She mounted a human rights campaign to lobby politicians and the media. In 1977, she married Donald Carr, who also supported her efforts.
Over time, it became clear that there were people in Syria who could be bribed – that Jews could be "ransomed" out of the country. "So I started to buy people for a price," she said.

Feld Carr developed networks through which she funneled money to agents for ransom and to reliable smugglers. "This rescue was so successful because I told nobody how it was working," she said.
"The stress was terrible," she added. She traveled all over the world to undertake her secret negotiations, which were always conducted through intermediaries. "I had to live two lives – a life of international intrigue, and then I had to be a mother and do the normal things of life."
The danger was immense – both for the families she was trying to rescue, who could be killed if discovered, and for Feld Carr, who received many threats. "The fact that I'm still alive is a miracle," she said.

The work itself was, at times, distasteful. "The disgusting part was buying another human being. How do you negotiate the price of human lives? I was breaking up children from their parents. It was like the 1940s – they were desperate to get their children out," Feld Carr noted.

Many of those Feld Carr smuggled out are now living in Israel, although they can be found as far away as Mexico City and Sao Paolo, Brazil. And many have named their children after her.
She has received many awards for her heroic efforts on behalf of Syrian Jewry, but the one she holds closest to her heart is the Order of Canada. "It's amazing – I got the Order of Canada for saving Jews. That had never happened in Canadian history. Now, that's something," she said.  "Everybody does things according to what they are put there for. Everyone can make a difference."