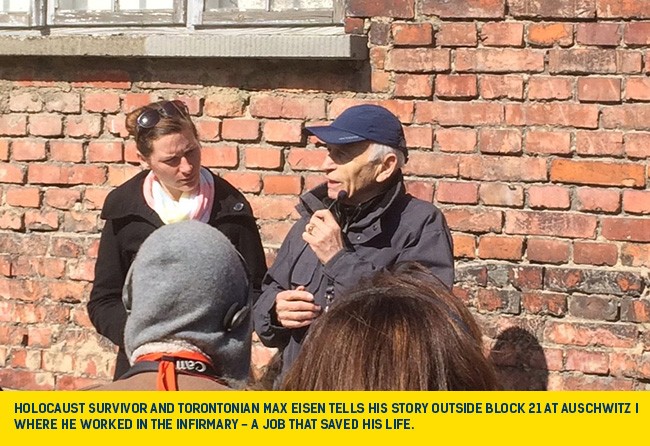 By David Matlow--If we came to Poland on the Adult March of the Living looking for answers, so far, three days into our journey, we only have more questions.

We arrived on Monday in a chartered El Al Jumbo Jet. The significance of flying on the national airline of Israel from our comfortable homes in Toronto to the graveyard of our people that is Poland was not lost on any of us. There are 400 of us in the Toronto contingent, comprised of students, adults and young adults, who have merged with 10,000 others from around the world as we participate today in the actual March of the Living from Auschwitz to Birkenau.

In Toronto, the March of the Living is supported by UJA’s Annual Campaign.

This will be our second time in Auschwitz in the three days we have been here. On Monday this was our first stop directly from the airport. We are all processing what we are seeing in a different way. The enormity of what we are experiencing requires us to focus on something of personal significance.  For some of us, it was walking through the gas chamber seeing the scratches on the wall. For others it was the room of hair cut off from the corpses. Or the room of brushes. Or the room of suitcases optimistically carried with the hope that indeed a new life awaited at the end of the train tracks.

We are honoured to have with us Max Eisen and Marty Baranek, two survivors who have courageously returned with us to the scenes of their personal horrors. Standing in front of Block 21 Max explained how his work in the infirmary located in that building kept him alive after he was carried, nearly dead after a beating, to that infirmary for medical attention. In Birkenau Marty told us how he was selected for the gas chamber, but survived by hiding in a stove (a story told while standing before that very stove). ‎ None of us will ever forget what we heard. We all understand we are here to hear it, remember it and tell it.

“It was extremely powerful to hear each individual testimony in Auschwitz,” says Brian Friedman, a Grade 11 student from Vaughan’s TanenbaumCHAT. “It made me reflect deeply about how it is possible for us as the human race to commit such crimes and cause such colossal tragedy. Humans are supposed to be the most moral and ethical species that exists, and the Shoah just demonstrates that people are capable of doing anything if someone else beside them is doing it.  We must stand strong as a Jewish people to ensure nothing like this ever happens again!”

Yesterday we spent in Krakow to try and understand the vast Jewish culture and history that was lost. A number of synagogues still stand in a city square which is surrounded by faux Jewish restaurants. You can lunch at the Ester or Ariel Restaurant on tcholent or a tray of Passover cheeses, listening to klezmer music played by a three piece orchestra performing behind a large menorah. You can take a Jewish tour in a golf cart to see the Oskar Schindler factory or, for the more adventurous, a segway tour of the ghetto. This Jewish Disneyland is hard to reconcile with the fact that the Jewish community of Krakow, a Jewish center of learning and life for centuries, was wiped out.  As our guide Mike noted: this is the presence of absence, or the absence of presence.

We are not alone on this journey. Krakow is filled with Jewish groups from around the world preparing to head, as we are, to Auschwitz today. We have met fellow Jews from Panama, Brazil. Costa Rica, Mexico and of course the US and Canada. Last night the adult groups from around the world joined together for a commemorative service at a concert hall. ‎ The evening ended with us all singing Hatikvah. Singing Hatikvah in Poland on Yom Hashoah is our declaration to the world:
od lo avda tikvatenu‎ - we have not lost our hope.

That hope is what caused the remnants of our people to rise up from the ashes to rebuild their lives. That hope enabled our people to build the State of Israel which is our guarantee that the tragedy of the Holocaust will not happen again. That hope brings us to this terrible place to learn and to remember, and to affirm our commitment to ensure that the horror is never repeated.

David Matlow was the Chair, along with Andrea Cohen, of last year’s UJA of Greater Toronto Annual Campaign