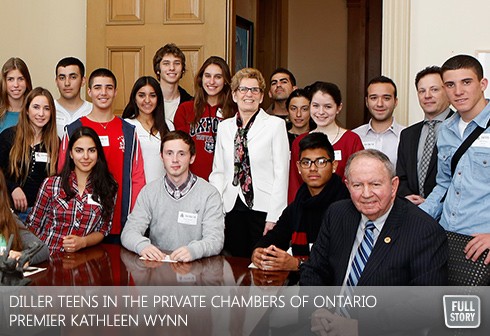 By Daniel Sourani--On Thursday, April 3, Diller Fellows from UJA Federation’s partner community of Eilat/Eilot arrived in Toronto before heading north on Highway 400 to Camp George in Parry Sound, Ontario, where they were met by their Canadian counterparts.

The Diller Teen Fellows Program is UJA Federation of Greater Toronto’s premiere leadership development program for Jewish teens in grades 10 and 11. Now operating in 16 other communities in the United States, Canada, and Israel, the goal of the Diller program is to develop future generations of active, effective leaders with a strong Jewish identity, commitment to the Jewish people, respect for pluralism and love of Israel. Together with their counterpart Diller group in Eilat-Eilot, Israel, participants explore the four Diller Pillars: Jewish Identity, Community Service, Leadership and Israel.

After spending a memorable Shabbaton weekend together, approximately 40 Fellows from both Toronto and Eilat-Eilot participated in JServe, a Jewish day of Volunteering that was attended by 400 other Jewish teens this year. The teens volunteered with Habitat for Humanity, D.A.N.I, Kehila Residential Programme, and the Four Elms Retirement Residence. The day concluded with a community-wide welcome dinner attended by 125 members of Toronto’s Israel Engagement family.

Monday’s schedule focused on the history and uniqueness of the Toronto Jewish community, and featured a scavenger hunt of “old Jewish Toronto”, followed by visits to partner institutions Beth Tzedec and Holy Blossom. They were met by UJA Federation’s Israel Engagement ShinShinim at both institutions, where they discussed their experiences in Toronto.

On April 9, the group spent the morning at Queen’s Park, where they were greeted by CIJA's Associate Director, Ontario Government Relations, Stephen Adler, who introduced Monte Kwinter, MPP, York Centre, to the group. Mr. Kwinter spoke to the group about the importance of Jews in Canada staying politically active.

Afterwards, the teens were invited to the private chambers of Ontario Premier Kathleen Wynn where they participated in an intimate discussion which touched on her position as Premier, as well as the Government's role in dealing with anti-Semitism and support for Israel.

After their time at Queen's Park, the group strolled the grounds of the University of Toronto, making their way to Hillel at the Wolfond Centre for Jewish Campus Life, where they were met by Executive Director, Marc Newburgh, and Associate Executive Director, Shirin Ezekiel. The staff at Hillel talked to the group about BDS and anti-Semitism on campus and what life is like as a Jewish student at an Ontario University campus.